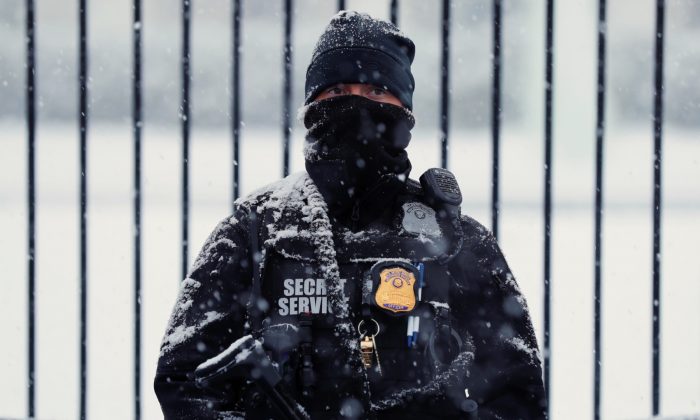 A snow covered member of the Secret Service keeps watch in front of the White House in Wash., on Feb. 20, 2019. (Kevin Lamarque/Reuters)
US News

The storm reached from northern Minnesota down through Missouri and east into the Mid-Atlantic region and could bring as much as 6 inches of snow along with sleet and freezing rain, the National Weather Service said in an advisory.

The storm forced the closing of federal agencies in Washington as well as schools in Philadelphia, Baltimore and Washington.

The winter storm is disrupting ground, air travel in the mid-Atlantic region.

Christina Saull, a spokeswoman for the Metropolitan Washington Airports Authority, which operates Reagan and Dulles, says many airlines canceled flights ahead of the storm.

Still, Saull says the runways are open and flights are taking off.

BWI spokesman Jonathan Dean says the snow team has been treating and clearing the airfield and despite delays and cancellations, flights are continuing.

Runways at Minneapolis-St. Paul International Airport were temporarily closed as fast-falling snow from the latest winter storm tested plow drivers who tried to keep up.

MSP spokesman John Welbes says “the rate of snowfall is the challenge.” Forecasters expected snowfall rates of an inch per hour with accumulations of up to 10 inches.

Minneapolis and St. Paul schools are among the scores of districts in Minnesota, Wisconsin and elsewhere that canceled classes Wednesday.

Forecasters are warning residents in parts of Minnesota and western Wisconsin the advancing winter storm could produce up to 9 inches of snow.

Minneapolis and St. Paul schools are among scores of districts that canceled classes Wednesday. The National Weather Service issued a winter storm warning for much of central and southern Minnesota, through eastern South Dakota and into western Wisconsin.

The Twin Cities is in store for its snowiest February on record by the time the storm subsides. The area already has 22.6 inches of snow this month. Wednesday’s snowfall will likely break a record of 26.5 inches in February set back in 1962.

The heaviest accumulation is expected Wednesday morning when snowfall rates of an inch per hour were expected.

The South, Especially Tennessee, Will Get Wet

A moist, warmer air mass is bringing heavy rain, possibly through the end of the week, from the Ohio Valley into the Southeast. Flood or flash flood watches will extend from northern Alabama and Mississippi northward to Ohio.

I’ll show you who saw the most snow along with more flooding on the Ohio River. When will Mon Wharf be closed? Find out in this afternoon’s videocast. #upwithKDKA #KDKAwx pic.twitter.com/krcucgx189

Rain has already hit the region, and forecasters say to expect 2 to 4 more inches of rain, with 5 to 7 inches predicted in parts of Tennessee, including Memphis and Nashville, through the end of the week.

Multiple waves of rain will affect North Georgia this week. Atlanta is likely to receive 2 to 3 inches of rain, with higher amounts expected in the mountains to the north.

Parts of northern Alabama saw flash flood warnings on Tuesday night. The Birmingham office of the National Weather Service said some areas may get 5 inches of rain by Friday morning.

Track the storm yourself

Reuters & CNN contributed to this report.