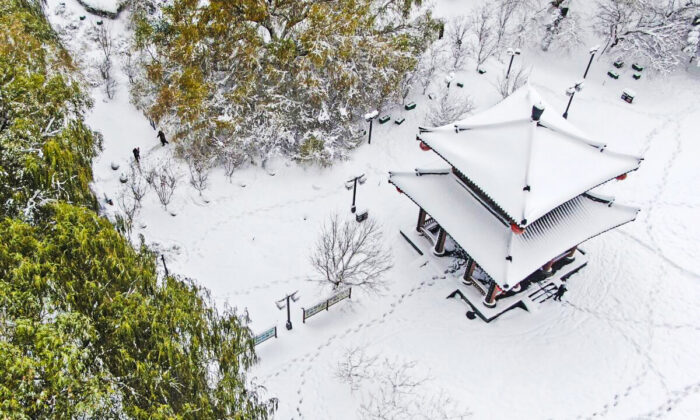 In this photo released by Xinhua News Agency, a snow covered pavilion is seen in an aerial photo at a park in Heping District in Shenyang, northeastern China's Liaoning Province on Nov. 9, 2021. (Yang Qing/Xinhua via AP)
China

BEIJING—A snowstorm that has lingered for several days in northeastern China has forced schools to close, suspended rail services, crushed greenhouses and left one person dead.

More than 50 centimeters (20 inches) of snow was reported in some cities in Liaoning province and China’s Inner Mongolia region.

Chinese state media said that one person died in Tongliao, a city in Inner Mongolia, but provided no further details. Snow fell for 46 hours in the city, the longest since at least 1951, state broadcaster CCTV said.

The cold front, which swept across northwestern China and Beijing last weekend, was weakening and China’s meteorological agency forecast the snow would end Thursday. Workers used excavators to clear roads as the snow abated, CCTV said.

About 1,000 people were trapped overnight in service areas of highways in Jilin province, authorities said in a statement posted on social media. Some highways were closed and train service was halted in the province.