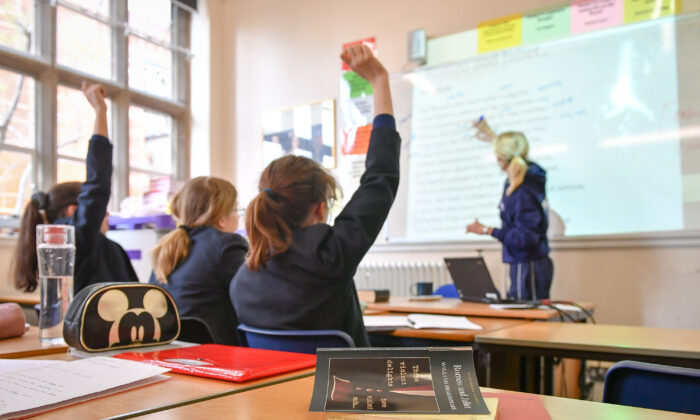 The UK Department for Education is planning to develop new guidance to help schools meet their legal duties on political impartiality. (PA)
UK

Schools Must Not Teach Contested Views on ‘White Privilege’ as Fact: UK Government

The British government has instructed schools not to “teach contested theories and opinions as fact,” including contested views about so-called “white privilege.”

The government on Thursday published its response to a report from the UK Parliament’s Education Select Committee, which said that the use of terms such as “white privilege” may be one of the reasons white working-class pupils are persistently falling behind.

In a report published in June, the committee said that its 14-month inquiry on left-behind white pupils from disadvantaged backgrounds had shown that “poor white pupils are far from ‘privileged’ in education.”

The committee said that it agreed with the UK’s Commission on Race and Ethnic Disparities that discourse around the term “white privilege” can be divisive, and that disadvantage should be discussed without pitting different groups against each other.

In its response to the report (pdf), the government said, “Schools must not promote partisan political views and should take steps to ensure the balanced treatment of political issues.”

“Schools should not teach contested theories and opinions as fact, and this includes contested views about ‘white privilege,’” the government said, adding, “Political issues relating to racial and social justice can be taught about in a balanced and factual manner, just as pupils are often taught about a range of different views on other topics.”

The government said these were “important principles to uphold” and it had “begun working with the sector to develop guidance which will help schools understand and meet their duties in this area.”

It added: “This guidance will support schools to teach about complex political issues, in line with their legal duties on political impartiality, covering factors including age-appropriateness and the use of external agencies.”

The Association of School and College Leaders (ASCL) responded by saying it was “not convinced” that the government guidance is necessary, because “schools and colleges are very experienced at teaching controversial and challenging subject matter” and “the legal requirement for teachers to remain politically impartial is clear and well understood.”

This is not the first time for the Conservative government to push back against the controversial concept of “white privilege.”

Writing in The Telegraph in June, Britain’s equalities minister Kemi Badenoch said schools should not teach the term “white privilege” unless they explain that it is a “highly contentious” concept, because it is divisive and “unnecessarily antagonistic.”

“Normalising the term ‘white privilege’ does not eliminate racism, it reinforces the notion that everyone and everything around ethnic minorities is racist and makes the majority white population more conscious about their race and exacerbates feelings of difference, creating a less cohesive society,” she wrote.