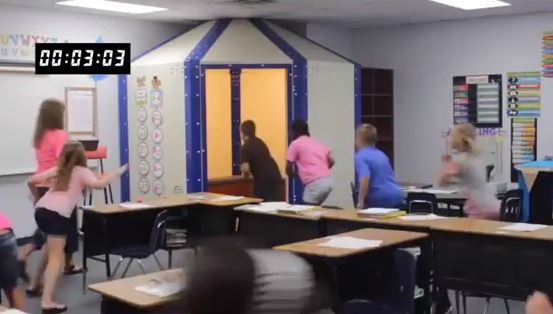 Some schools in Oklahoma have created bulletproof storm shelters in a bid to keep students safe during shootings.

The shelters are in place for potential shootings but can also be used as traditional storm shelters in case of a natural disaster.

The school district in Healdton, a town with a population of around 3,000, has installed nine bulletproof shelters so far in the elementary school and the middle school.

Officials are working to install them for the high school.

“When tornadoes strike, and Lord help us, when you have an intruder on campus, to know that you have somewhere to go quickly for the safety of your students, it’s very relaxing,” Superintendent Terry Shaw told KOCO.

“I volunteered. I did not feel comfortable putting these in my buildings if I wasn’t willing to do it myself. So I offered to go inside,” Shaw said. “It was very surreal, but I felt very comfortable. Very safe.”

The company behind the shelters is called Shelter-In-Place.

The shelters in Healdton were the first to be installed in the country with the first seven installed in 2014 and as of June 2017  Atoka, Oklahoma has also installed the shelters. Shelter-in-Place is in discussions to install more in other school districts.

Shelter-in-Place executives said they realized the need for such shelters after the shooting at Sandy Hook Elementary in Connecticut in 2012 and the tornado that wreaked havoc in Oklahoma just a few months later.

“After seeing these crisis events and saying, ‘Somebody ought to do something,’ we realized that we are ‘somebody.’ We felt confident that we and our associates were uniquely capable to create a solution to these horrific tragedies and became seriously involved, invested, and dedicated to creating a real and viable solution to protect kids in schools from these horrible crisis events that aren’t slowing down,” they stated on their website.

The shelters can be customized in different sizes; the ones in Healdton fit 35 students and two teachers.

The rooms in Atoka are scattered throughout the school in places like the gym and library.

“Before the safe rooms came in, we had to load the kids up on a bus and take them across town, which took anywhere from 14 to 17 minutes, which really in anybody’s terms is not acceptable,” Atoka Public Schools Superintendent Jay McAdams said, reported KXII.

The six rooms across Atoka Elementary School can hold up to 700 people, with television monitors inside that enable people inside to see what’s going on outside.