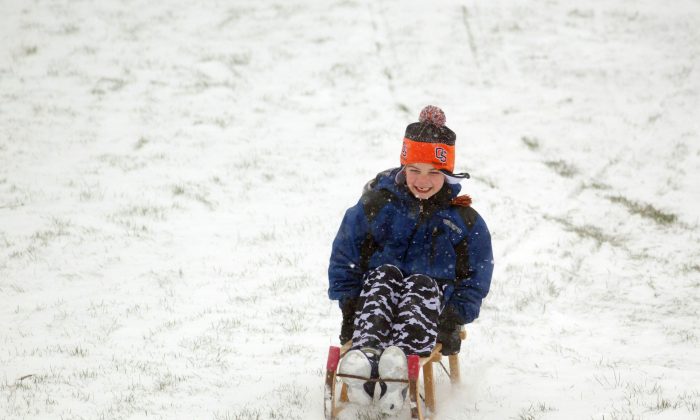 Amidst the frustrations over the deep piles of snow in the northeast is the increasing concern of parents and educators about the number of school days and weeks lost to the maelstrom of this winter.

Schools in the United States are generally required to have a 180-day school year. As schools inevitably scramble to make up for the lost days, many of those living in parts of the country suffering an exceptional winter ask why 180 days is the target, and is it the right target? Are fewer school days detrimental to children’s learning?

These are questions I have been involved in researching for years. My colleagues and I have made use of miserable winter conditions over many years, to serve as a “natural” experiment. That is, winter sometimes disrupts school and this helps us understand the consequences of less time in the classroom.

Research shows that fewer school days do reduce student performance, especially for the more disadvantaged students. Evidence from previous winters also shows that more days in school do, in fact, improve achievement for American students overall, something that has been hard to accomplish in recent times.

Studies of student performance in the states of Maryland, Colorado, Minnesota, and Massachusetts have all found that in years when the winter is especially bad, scores and pass rates fall.

Across these settings, researchers typically find that each week of missed classes has a significant impact on pass rates. This, additionally, can have a real detrimental impact on schools that face the risk of sanction for failing to meet targets set by state education authorities.

One recent study estimated that over a three-year-period in Maryland, an average of about 20 elementary schools failed to meet learning gains required by the state in a year. These schools would likely have exceeded the threshold had they been able to meet all scheduled days.

More worrisome is that the learning loss due to fewer school days has a disproportionately higher effect on already disadvantaged students. The impact of less time in school has been found to have the most negative effect on children from low-income families.

Literature on summer learning loss (the extent to which students fall behind where they were at the end of the previous academic year) shows this relative disadvantage to be due to a lack of summer enrichment activities such as camps, museums and library visits, and travel that only middle class or wealthy children can afford.

For decades there has been a chorus of calls among policy makers to extend the school year, including by President Barack Obama and Secretary of Education Arne Duncan, calling for a school year beyond 200 days, so as to come close to the number of days students attend school in other industrialized nations.

The 180-day school year is a target that developed as states around the country converged their systems during the last half of the century. The first standardization of school calendars occurred in the 19th Century, when states started passing compulsory school laws.

During that era students in cities went to school on many more days than students in rural areas. By the early 20th century, school calendars around the country were varied, with students in many states attending school for far fewer days per year.

A key factor in settling on 180 days was the Elementary and Secondary Education Act of 1965 that focused attention on inequities. This led lagging states to increase their school year to 180 days.

So, if we know that more time in school improves outcomes, especially for students falling behind, and each year we must scramble to make up for winter’s interruption, why not extend the school year?

One reason could be that businesses relying on summer tourism or children in need of summer camps or care are opposed to the idea. Another group that has been vocal in opposition are the more affluent middle-class parents, who cherish the freedom of summer. Parents whose children would benefit most from extended school years are less vocal.

However, the most substantial obstacle to extending the school year is money. Re-constituting the school year means re-negotiating teacher and staff contracts, paying for extended use of buses and buildings, and in many cases retrofitting schools to include air conditioning to operate into the hot months of summer.

Indeed, these costs led Oregon to repeal the provision to extend the school year of the 1991 Education Act for the 21st Century.

So, it is hard to imagine a national push to extend time in school without real investment. And like the prospect of spring for those in the northeast, extending school time, seems to be a bleak possibility, more so, when states across the country are looking to reduce costs.