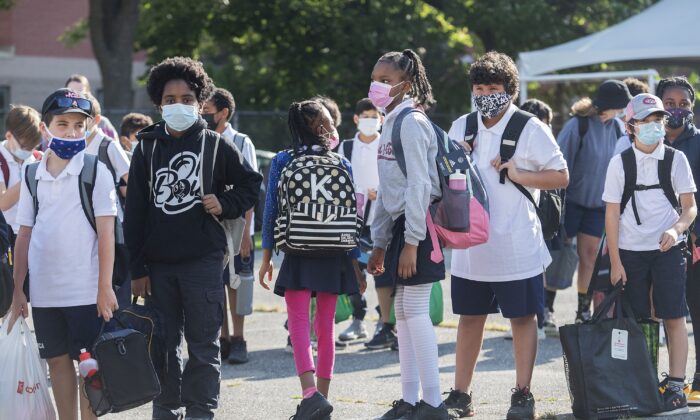 Students line up before classes start on the first day of the school year, in Montreal on Aug. 31, 2021. (The Canadian Press/Graham Hughes)
Viewpoints

It is obvious that Canadians are divided—bitterly divided—over a number of important issues.

Between the mudslinging of the federal election and the vocal disagreements over how to handle the ongoing COVID-19 pandemic, people are on edge. Family members aren’t speaking to each other, communities are divided, provinces are at odds with each other, and many friendships have come to end.

While these disagreements are bad enough, they are substantially amplified by social media. Before the advent of social media, people could not communicate with many other people in the heat of the moment. Nor could they spread misinformation with the click of a button. With people spending more time than ever online, it’s not surprising that it has become extremely difficult to see past our differences.

To make matters worse, it’s become easier than ever to avoid people with whom we disagree. Like-minded people tend to join the same organizations, work in similar occupations, and share the same social media circles. As well, people don’t hesitate to hit the block button when someone challenges their deeply held views.

Fortunately, there is one place where people still interact with each other on a daily basis—public schools. Students attend school for about 200 days a year for 12 years, and they don’t have the luxury of avoiding contact with people who are different from themselves. Diversity is the reality in nearly every public school in Canada.

Not only do students have to share space with other students who don’t share their views, they will almost certainly be taught by teachers who challenge their way of thinking. Just as students do not have the same opinions, neither do teachers. Whether a student is ideologically liberal or conservative, it’s virtually certain that every one of them will be forced to think through his or her beliefs.

Of course, this only holds true when schools allow for viewpoint diversity as opposed to mere diversity of appearance. True diversity is about recognizing that people hold different opinions even if one person finds them offensive. Forcing everyone to think the same way is indoctrination, not education.

If people look different but think the same, schools have failed in their mission. The objective is for people to look and think differently.

Thus, schools should strive to have a teaching staff that is diverse in thought rather than just in appearance. If students are taught by one left-wing teacher after another, it will be harder to properly expose them to different ways of thinking. It also makes things uncomfortable for students who already hold right-of-centre opinions.

This is why school administrators should avoid making social justice initiatives or climate change campaigns the focus of their school’s mission. Not all students are going to be comfortable attending anti-pipeline rallies or listening to anti-Israel propaganda. While education faculties typically present many of these topics as “settled,” they are far from settled in the broader community. Schools need to serve the community, not the ideological agenda of some teachers and administrators.

The good news is that it is entirely possible to unite people under a common banner of showing respect for ideological diversity. When teachers allow wide-ranging discussions in their classrooms and when they encourage students to think for themselves, students learn that it is possible to disagree without being disagreeable. Political, religious, and ideological differences never need to become personal.

Students learn a lot when their teachers do a good job of moderating discussions about controversial topics. Not only do they learn about the topic, but they see their teachers modelling proper discussion etiquette. This is why teachers must remain firmly in control of their classrooms. It’s a tricky balance, but one that can be achieved by well-educated and mature teachers.

It’s also healthy for students to see that their teachers do not always agree with each other. Students who are taught by teachers from various sides of the political spectrum are likely to benefit. They are likely to be better educated because of their exposure to a variety of facts and ideas.

The cure for divisiveness does not come from forcing everyone to think the same way. Rather, we need to move forward in unity by accepting ideological differences and learn how to respectfully engage in challenging conversations.

It really is possible to have unity in the midst of diversity. The way forward is to show respect for diverse opinion. This is what we need in schools and society today.