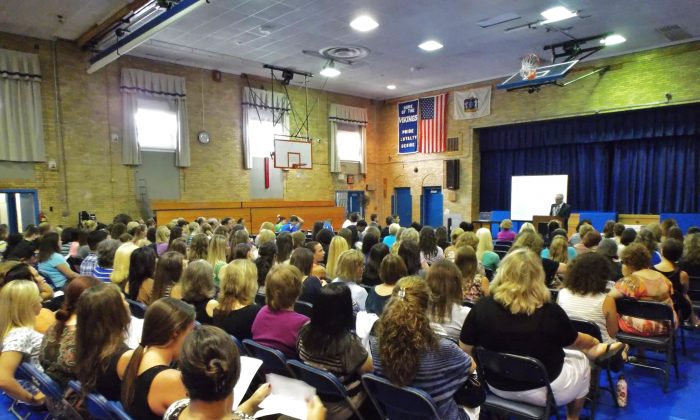 Over 100 educators from the North Arlington Public Schools in New Jersey assemble for a professional development session conducted by Vincent J. Bove prior to the school year on Sept. 3, 2013. All attendees received copies of “Early Warning Timely Response: A Guide to Safe Schools.” (Vincent J. Bove)
News

Tragically, as the school year ends, we have once again witnessed a year of violent incidents at schools and campuses nationwide.

American flags continually fly at half-staff. Our culture of violence has no end in sight. Alarmingly, tragedies appear more commonly but outrage within society is diminishing. America must wakeup, take action, and stop the carnage.

Recent and notorious incidents of the rampage paint an unsettling picture:

June 10, 2014: A student is shot to death by another student at Reynolds High School in Troutdale, Ore. After the killing, the shooter commits suicide.

May 24, 2014: Six lives are lost on the University of California–Santa Barbara campus before the shooter commits suicide.

April 9, 2014: A mass stabbing by a 16-year-old student of 21 people takes place at Franklin Regional High School in Pennsylvania. Four victims were left in serious condition.

Dec.13, 2013: A student dies eight days after being shot at Arapahoe High School in Centennial, Colo.

Oct. 21, 2013: A 12-year-old student kills a teacher and shoots two other 12-year-olds before killing himself at Sparks Middle School in Nevada.

April 16, 2007: The deadliest shooting in U.S. history by a single gunman takes place at Virginia Tech with 32 students killed and at least 17 wounded.

Responding to the Crisis

The crisis demands a comprehensive response with many approaches including the following:

Although I appreciate the importance of all of these approaches and have addressed them accordingly in my work, let us take a moment to focus on warning signs. In my presentations throughout the United States since Columbine in 1999, I have found too many individuals in educational, security, and law enforcement positions detached from warning signs.

At numerous venues, I have held up a copy of “Early Warning Timely Response: A Guide to Safe Schools” before large crowds. Many respond that they are unfamiliar with the classic document. This collaborative publication of the U.S. Department of Education and U.S. Department of Justice was released in 1998, before the Columbine High School tragedy in April 1999. It was developed to “provide the practical help needed to keep every child in your school out of harm’s way.”

This document must be required professional development training for all involved with education and school security. It offers research-based practices designed to identify warning signs early and develop prevention, intervention, and crisis response plans related to:

I have given thousands of copies of it at assemblies, all at no cost thanks to the aforementioned agencies. The teaching within it is critical because as we continually see with reviewing tragedies, warning signs were ignored and the violence was preventable.

America must wake up and put the lessons learned from school and campus violence tragedies into action. The reawakening of the nation will only take place when we have eyes wide open to comprehensive security issues and respond to warning signs with full-force resolve and action.