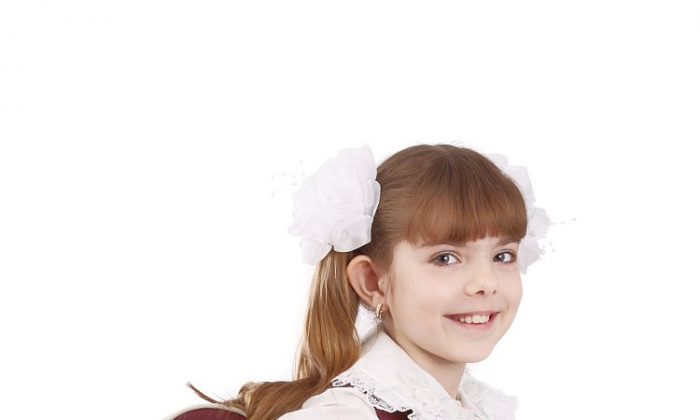 Until a school decides whether or not to enforce school uniforms, heated debates often ensue among the parent body. This controversial topic invites a multitude of opinions and elicits a number of emotions.

On one side of the debate is the right for children to choose what they wear and to allow their creative expression through clothing.

On the other side is the competitiveness that can exist among children over clothing (the haves versus the have-nots and brand-name brandishing). There is also the lack of modesty or inappropriate choices (for instance, tank tops and ripped pants).

The Epoch Times asked the following people: What is your opinion about school uniforms?

I’m a little torn on the issues of school uniforms. On one hand, it seems like an easy answer: There’s no need for back-to-school clothes shopping or children being concerned with what outfits to wear each day. It would certainly save time and money.

On the other hand, though, I do feel uniforms prevent kids from expressing their individuality, their style, their personality. I attended a Catholic grammar school, so I was required to wear a uniform. I didn’t complain about it every day, but I do remember wishing I could dress uniquely instead of exactly like everyone else. Our uniforms felt very “generic.”

I would have to say, overall, I don’t think we should require school uniforms.

*****
I do not agree with school uniforms. It seems to go against the individual’s desire to express one’s self. I wouldn’t want to keep track of one outfit that had to be worn over and over again (even if there were two changes). I am an artist, and to me it would be very sad to be forced to wear it.

*****
Funny, as I have one child who has been in uniforms for several years, another without.

From my perspective, I favor uniforms on several fronts. They take the drama out of the morning routine (very helpful for parents!); they allow us to take advantage of reduce, reuse, recycle because we have a uniform swap at our school; and they help prevent the commercialization of our children who are not “branded” by labels running across their shirts, jackets, or shoes, something I personally find troubling.

I appreciate the formality and for the practical issues of ease, the stress reduction of choice-making each morning, the equalizing of students’ socioeconomic backgrounds.

The one note I would make based on my experience is please make the uniform sartorially pleasant. For eight years I wore a light-green shirt with a dark-green skirt, which probably resulted in my adulthood over-interest in fashion as a means to compensate!

*****
I am against school uniforms, while I can understand a proud unified look for a private or public school that a uniform can bring. And some say that it may bring focus to the schoolwork instead of the students.

I believe that uniforms severely stifle creative expression and are a cover-up for a widespread problem that exists in our society. People need to learn tolerance and respect for each. Covering up the problem with uniforms does not address the problem.

Schools where students wear uniforms will find other ways to bully and create judgments—whether it is through hairstyles, jewelry, shoes, financial [competition], intelligence, etc.

The task at hand is to get students to be able to focus on the schoolwork, instead of comparing each other. Self-esteem work and kindness is key.

*****
Uniforms eliminate daily debate on what to wear between child and parent. I would think it would be cost-effective. Also there would not be a need for a “dress code” as all would be dressed the same.

Without a uniform there is always someone who pushes “dress code” to the max and wears something that may be considered borderline inappropriate.

I guess you could say I think a uniform is a good idea!

*****
During these tough financial times, the use of uniforms can help families prepare for another school year by decreasing the amount of money they may normally spend on school clothes. Within schools that have a unified dress code, many teachers and principals feel that students’ behavior improves.

I think this is more an issue at middle and high school. At the elementary level, students are just getting the opportunity for the first time to decide what they want to wear. For them, it is their first step into autonomy and independence. I’m really on the fence about this one.