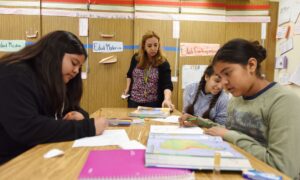 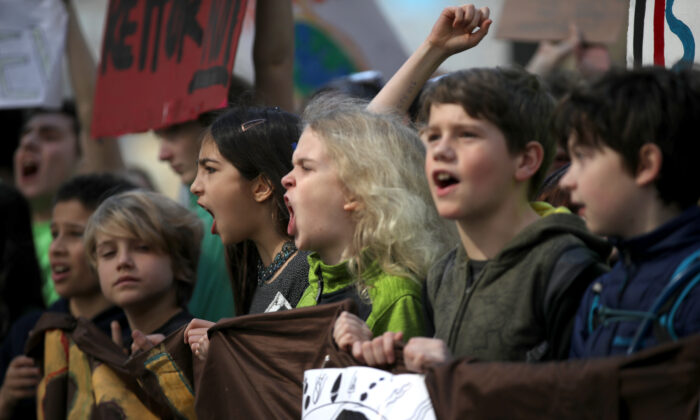 Students in a protest march in San Francisco on March 15, 2019. (Justin Sullivan/Getty Images)
US Features

Public schools across the United States increasingly are spending taxpayer money on programs that push quasi-Marxist ideology on their students.

School districts have spent hundreds of thousands of dollars on programs such as Deep Equity, Youth Equity Stewardship (YES), and others that claim to help minority students do better at school, but have an ideological agenda mixed in.

Deep Equity and YES are provided by California-based for-profit educational company Corwin. On their face, the programs seek to expose teachers and students to different cultures to help them better understand students of different backgrounds. But piggybacked on that notion is the introduction of more far-left, progressive political theories such as “intersectionality” and “white privilege.”

Similar programs and initiatives have been introduced to thousands of schools, and many times, it appears that’s happened without parents noticing or understanding what they entail.

According to Michael Rectenwald, a former liberal studies professor at New York University and author of “Google Archipelago: The Digital Gulag and the Simulation of Freedom” and “Springtime for Snowflakes: ‘Social Justice’ and Its Postmodern Parentage,” the intersectional theory replaced Marxism among contemporary leftists, but bears many similarities to Marxism.

Instead of focusing solely on “class struggle,” the theory applies the Marxist concept of “struggle” broadly to relationships between races, genders, ethnicities, religions, and a plethora of other “identity groups.”

Through the lens of intersectional theory, human history is largely reduced to white Christian men being the “oppressors,” and everybody else being “intersected” by one or more layers of this “oppression.”

Literary critic and author Bruce Bawer wrote in his book, “The Victims’ Revolution: The Rise of Identity Studies and the Closing of the Liberal Mind,” that “they’ve been trained to reduce the rich complexities and ambiguities of human life to simple formulas about oppressors and oppressed, capitalists and workers, Western imperialists and their non-Western victims.”

The manual, a copy of which was reviewed by The Epoch Times, states, “We go deeply into those historical and contemporary dynamics that have created and sustained systems of oppression, marginalization, and inequity for far too many of our students and their families.”

While the common meaning of oppression usually refers to cruel treatment and subjugation by tyrannical authority, advocates of intersectionality have the term encompass “implicit” (meaning unintentional) actions in day-to-day life.

For example, assuming that somebody is heterosexual in a casual conversation is called “heterosexism” and is one of the many “insidious and often implicit and intersectional inequities” and “oppressions,” according to a 2016 paper by Paul Gorski, founder of the Equity Literacy Institute (ELI) (pdf).

“Equity” as portrayed by advocates of “intersectionality” means a demand for students from “identity groups” they deem “oppressed” to receive more resources.

They insist that the cause for any difference in average outcomes between the groups must be some form of discrimination, according to Robin Eubanks, a lawyer, education researcher, in her book “Credentialed to Destroy: How and Why Education Became a Weapon.”

Even though “equity” advocates often claim they want to ensure success for everyone, ELI makes clear that “equity” is about taking from some in order to give to others.

The YES guidebook, reviewed by The Epoch Times, promotes much of the same ideology as Deep Equity but in a less obvious manner, such as through art assignments and lyrics of songs taught to the students.

“Essentially, students and teachers are being taught anti-white, anti-Christian hate,” said a parent of a child in the Chandler, Arizona, Unified School District (CUSD), which includes over 45,000 students in the southeastern part of the Phoenix metropolitan area. “Students are taught to lecture adults about their biases. They are being taught to be social justice activists.”

The district introduced YES and Deep Equity in 2018 at a cost of more than $400,000, Arizona Daily Independent reported.

District officials have defended the programs, saying YES is voluntary for students and that with Deep Equity, the district only used some parts and left out the material parents mainly objected to.

Yet some parents questioned why the district spent money on the programs in the first place, instead of investing in proven measures such as reducing the number of students in each class.

Moreover, YES instructs its participants to proselytize its ideas among students, parents, and school staff.

“It was this training that was specifically activist training and does include more social justice concepts, including oppression and privilege,” the parent, who asked to remain anonymous, said in an email to The Epoch Times.

The district officials themselves, it appears, have subscribed to the theories underpinning the programs.

A questionnaire for applicants to the district’s “Equity Advisory Board” asks, “What experience do you have personally or professionally that helps you to understand issues related to educational equity, diversity and or the intersectionality of race, gender, class, religion and sexual orientation, language, special education, etc.?”

It’s not clear how many school districts have adopted Deep Equity or YES. Social media posts indicate that at least some districts across Arizona, Kansas, and Virginia have done so.

ELI is a North Carolina-based for-profit, offering “equity assessment,” workshops, and “strategic planning” to schools. It provides on its website materials such as “Ideological Adjustments for Well-Meaning White Educators” and advocating principles such as “prioritize equity over peace.”

“Never, under any circumstance, should equity concerns be handled through processes that assume parties occupy similar spaces along the privilege-oppression continuum,” the website states, channeling the intersectional worldview.

The website says ELI has been hired by “several organizations, schools, and universities … to help ‘begin the conversation’ about equity,” also stating that Gorski “has worked with educators in 48 states and a dozen countries.”

It’s not clear in how many states ELI is currently active.

The Minnesota government is offering teachers ELI workshops for $400 a head, lunch included.

Vermont handed out nearly $200,000 earlier this year in “Equity Literacy Grants” to 13 of its school districts, including one for the Orange Southwest School District for a multi-year project with ELI.

Another of the Vermont grants went to a project partnering with Seed the Way, a for-profit education consultancy led by Rebecca Haslam, who was awarded Vermont’s State Teacher of the Year in 2015 and is an assistant professor at St. Michael’s College.

The company’s website lists past clientele of dozens of schools, school districts, and colleges and offers training on “Equity Literacy” and services such as “unpacking the Social Justice Standards K-12.”

The “Standards” were produced by the Southern Poverty Law Center (SPLC) as “age-appropriate learning outcomes divided into four domains—identity, diversity, justice, and action.”

In one “anti-bias scenario,” the standards encourage students to speak against other students who criticize breaking immigration laws (pdf).

The Vermont Agency of Education “considers data and legislation to inform policy and practice, including how to prioritize grant opportunities,” Ted Fisher, the agency’s director of Communications and Legislative Affairs, told The Epoch Times in an email.

“These can and often do validate intersectional theory (as it is understood to explicate that individuals can experience marginalization when belonging to many ‘groups’—e.g., economic disadvantage and female; Latinx and LGBTQ; etc.).”

When asked whether the agency subscribes to the intersectional explanation that such “marginalization” is caused by “oppression” by “white Christian heteropatriarchy,” Fisher didn’t respond.

Intersectionality doesn’t always enter schools through consultants. Sometimes, states roll it out themselves.

The New York State Department of Education issued a “Culturally Responsive-Sustaining Education Framework” earlier this year (pdf), with goals to not only help students academically but also to “create … students who are sociopolitically conscious and socioculturally responsive” and “who have a critical lens through which they challenge inequitable systems of access, power, and privilege.”

Such students should “act as agents of social change to redress historical and contemporary oppression,” the document says.

Since 2018, Oregon has required schools by law to teach children starting in grade five to “identify issues related to historical events to recognize power, authority, and governance as it relates to systems of oppression and its impact on ethnic and religious groups and other traditionally marginalized groups in the modern era.”

Earlier this year, California put out, for public comment, an “Ethnic Studies Model Curriculum” for high schools, promising the courses will “critique empire and its relationship to white supremacy, racism, patriarchy, cisheteropatriarchy, capitalism, ableism, anthropocentrism, and other forms of power and oppression at the intersections of our society.”

The state announced in September that it will “revise and improve” the curriculum. The move came after education researcher Williamson Evers criticized the proposal in a Wall Street Journal op-ed.

By Force of Law

It was legal mandates that prompted Eubanks a decade ago to start researching the changing landscape of education, after she noticed legislation that, in her view, opened the door to detrimental changes in education.

She’s predicted that the only way to reach the goals of the “equity” advocates would be to change the nature of education itself, moving away from traditional academics and focusing instead on emotions and “experience.”

Eubanks dreaded that vision, pointing out that this way of teaching has known neural effects—it “rewires the brain.” In her view, the schools are increasingly focusing on manufacturing experiences for children, to mold their reactions and worldviews to have them become advocates for a prescribed vision of the world.

“The purpose of equity mandate is consistently to shift the nature of what goes on in education and to do it to us, to make it mandatory,” she said.

Update: The article has been updated with a response from the Vermont Agency of Education.