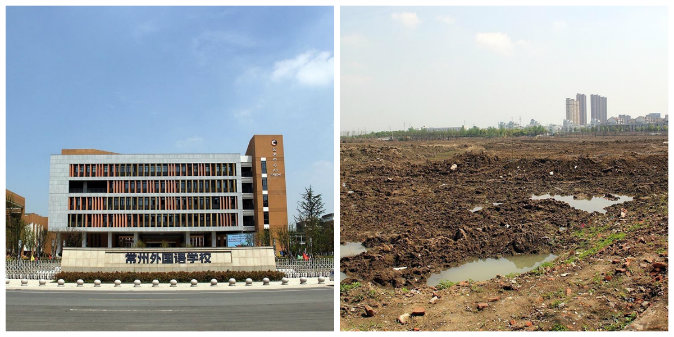 The school principal of a foreign languages school in a coastal province of China, where hundreds of students were recently found to have fallen gravely ill, has accused the official Chinese regime broadcaster of misleading reporting.

“The media is not telling the truth, and we have nothing to be ashamed of,” said Cao Hui, the principal at Changzhou Foreign Languages School in Jiangsu Province in response to a question by a parent representing the sick students, according to an April 20 report by Beijing News, a semi-official news outlet.

A day earlier, mainland Chinese media had reported that about 500 students at the Changzhou school had come down with a litany of illnesses— more serious cases of dermatitis, eczema, lymphoma and even leukemia. The soil in the area was found to have contained very unhealthy levels of toxins, including chlorobenzene, a highly toxic chemical that damages the kidneys, liver, and nervous system.

State broadcaster China Central Television (CCTV) reported that the pollutants found in the soil and air matched those found at an industrial site across the street. Also, three chemical plants used to occupy the Changzhou school site.

Principal Cao, however, insists that there is no correlation between the school’s highly toxic environment and the health problems the students developed.

“The student with lymphoma showed symptoms in late July, before we moved to the new campus,” Cao said, according to China Daily. And “another student that CCTV says was diagnosed with leukemia has not been found at the school.”

Internet users on China’s popular Sina Weibo microblogging website were critical of both Cao and the local authorities.

“Large Refrigerator SOLO” from Guangdong wrote: “You forced the school principal to come out yesterday to say everything was fine. And today the Changzhou officials announced that there the students are in poor health. This makes the principal look like a liar, and now people are angry with her. What a great tactic by the local government to shift the hate to someone else.”

Yixining from Zhejiang wrote: “The school has obviously become a scapegoat for the government. It is the local government that decided the location of a school. No school gets to choose its site. Oh dear, those poor kids.”

Zhang Junfeng, a water conservancy expert and a professor at the University of Southern California, told the New York-based New Tang Dynasty Television, that he did not believe that this “toxic school” was just an isolated incident, and similar social problems would be common in the future.

“They are only experienced in maintaining or protecting their positions. So they put very little effort into the management of regular public affairs. There might be a lot of problems but they just try to keep the status quo. And when something bad happens, will they try to cover it up,” Zhang added.