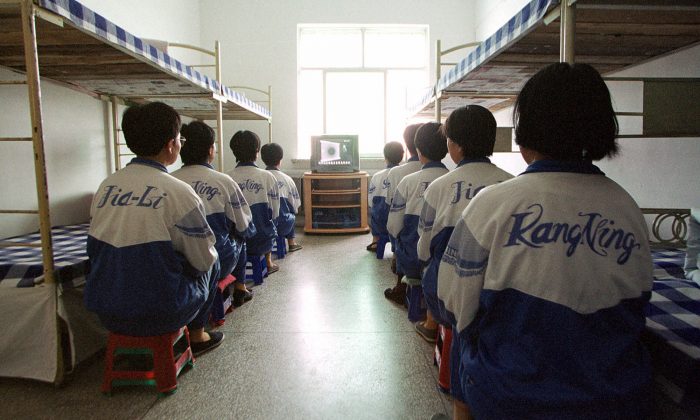 Falun Gong practitioners are shown in Masanjia labor camp watching a video meant to re-educate them during a propaganda tour arranged by the camp authorities on May 22, 2001. One of the tortures used on the practitioners involves handcuffing them awkwardly between bunk beds, and then yanking the beds apart, causing excruciating pain. (AP Photo/John Leicester)
China

Chinese were shocked and outraged early this month to read that a labor camp in the northeast of the country, called Masanjia, has for years been administering extreme and excruciating torture against those detained in it. Much of the detail for that story was obtained from a diary smuggled out of the camp in the vagina of one of the survivors.

But horrified readers never found out the identity of victims, or the purpose of the torture and brainwashing they were subject to, or the sinister and crucial role of the camp in carrying out the most sweeping campaign of persecution orchestrated in contemporary Chinese history.

Former Chinese Communist Party leader Jiang Zemin was behind that campaign, and his chief lieutenants personally visited the Masanjia facility, and presented awards to guards for devising the most innovative and effective techniques of inflicting pain.

Prison guards used a variation on the torture technique “five horses splitting the body” on Zhang Lianying, who was sent to Masanjia in 2008 because she was a hard-to-crack case—the intense, specialized torture devised and dished out by Masanjia was supposed to rid her of her beliefs in Falun Gong’s principles of truthfulness, compassion, and forbearance.

Guards locked her feet in wooden boards, then snapped cuffs separately onto her hands — they then tied rope to the cuffs, fed them through metal bunk beds to each side of her, and pulled them forward hard. Guards at her back pushed her forward and violently kicked. Her body was stuck, bent at a 90-degree angle, and torn forward. “The pain quickly made my clothes soaked with sweat,” Zhang wrote in an experience. Minghui.net, a Falun Gong website, notes: “The pain of this torture is unimaginable.”

Masanjia, named after the county in which it is located in Liaoning Province, in China’s northeast, was founded in 1956, and for decades imprisoned intellectuals, “rightists,” and others that the Chinese Communist Party thought needed to be locked up and pressed into hard labor.

Then, in July of 1999, then-Party Secretary Jiang Zemin launched a high-profile political campaign to eradicate the Falun Gong spiritual practice. Very quickly, Masanjia became a core part of this campaign.

Jiang had already handed down internal Party decrees that no means used against practitioners were too excessive and deaths of Falun Gong practitioners in custody may be counted as suicides, according to victims, who relayed threats made by guards. While Jiang set the policy, Masanjia showed the means.

Wan Xiaohui, a 58-year-old-woman, was sent to Masanjia in 2010 for distributing DVDs related to Falun Gong. On her first day there, she was stripped naked and left in the freezing cold. Another day, “they inserted needles into my fingernails.”

Masanjia in 2000 set up a ward specifically dedicated to locking up and working on the minds of Falun Gong practitioners. This was in response to directives from top Party officials, according to the World Organization to Investigate the Persecution of Falun Gong, a group based in New York known for exhaustive primary research on Party documents and directives.

Masanjia isn’t connected to the top Party leadership through a formal chain of command—institutionally, it sits under Liaoning provincial authorities—but it takes its commands from top leaders in the central Communist Party apparatus involved in the persecution of Falun Gong, as shown in WOIPFG’s research.

Masanjia’s torture techniques were cause for an award ceremony and speeches by top-level Party officials in August 2000. Li Lanqing, at the time the head of the 610 Office, a top-echelon extrajudicial Party task force set up to oversee the persecution of Falun Gong, along with Luo Gan, a top security official, spoke to a group of cadres, promoting Masanjia’s “transformation” techniques.

The term “transformation” refers to the process of breaking the will of Falun Gong victims and forcing them to, often through torture, renounce their faith and pledge allegiance to the Communist Party.

“I was tortured three times in Masanjia,” says Wang Chunying, in a Chinese interview with the independent broadcaster NTD Television. “They dragged me between two bunk beds. My hands were cuffed to each bed, one high and one low, stretched between the beds. The police violently kicked apart the beds, so hard that they couldn’t kick them any further. My whole body was harshly pulled taut between the beds. The piercing pain was unbearable. That feeling of agony is impossible to describe in human language. I screamed out, and sweat poured down my face.”

Masanjia had by November 2000 already received over 31 official delegations, consisting of over 500 people, from most provinces in China, according to an internal 610 Office document held by WOIPFG. Security officials had come to learn Masanjia’s dark secrets.

Han Guangsheng, a defector from the 610 Office who now lives in Canada, gave testimony that corroborates WOIPFG’s research in an interview with Sound of Hope Radio.

“The higher-ups sent down an order to forcibly transform the detained Falun Gong practitioners—that is, to brainwash them, to make them not believe in Falun Gong—but at the beginning no department knew how to do it,” Han said.

“Masanjia’s transformation rate was very high. So our province organized all deputy bureau chiefs in the judicial system to go there and study.”

Han Guansheng asked a colleague, Mr. Zhang, what he had learned. “He said ‘I get it now. Masanjia’s transformation experience has just one item: electric batons.'”

Chen Kaiqu, a master’s graduate from the Chinese Academy of Science, was transferred to Masanjia in 2007. In 2008 he refused to do hard labor, so a guard shocked his face and neck with batons, for hours. “His face was covered with blisters and burns,” says Minghui.net. “He was disfigured to the extent that even those who knew him could not recognize him.”

Masanjia was singled out in official documents, such as an April 25, 2001, circular by the Central Organization Department, the Party’s secretive personnel agency.

“The Masanjia Labor Camp in Liaoning Province has, with a high level of political responsibility, made it a priority to focus on transforming Party member who practice ‘Falun Gong,’ and has also transformed ‘Falun Gong’ personnel in other labor camps,” the circular read.

“[Masanjia has] made great efforts to explore how to do well new forms of political thought work on the special group.”

This term “special group,” was used in the April 6 exposé about Masanjia in the Chinese magazine Lens, which gave an authoritative account based on interviews with victims, court records, and official directives. The article shocked the Chinese public, with hundreds of thousands venting their outrage on the Chinese Internet.

Key personnel at Masanjia have received a series of awards, for example the “Outstanding Education Expert” medal, according to official Chinese websites. “Education” in this case is a euphemism for transformation through torture.

The awards to Masanjia officials, the way that extreme torture techniques were invented in Masanjia and then spread countrywide, and the way that top Party officials explicitly made Masanjia a benchmark facility to emulate, all indicates that the institution was, as WOIPFG puts it, “under the direct control of the Jiang Zemin group for persecuting Falun Gong.”

Jiang Zemin was the general secretary of the Chinese Communist Party at the time. Despite recent talk of reform of the labor camp system, the horrors of Masanjia are official Party policy until further notice.