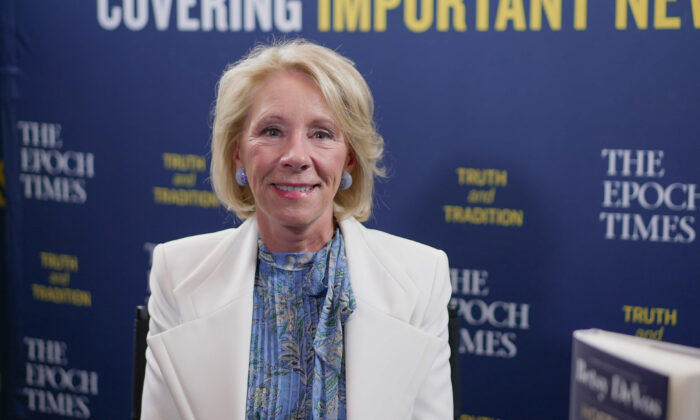 Former U.S. Secretary of Education Betsy DeVos, author of the new book "Hostages No More: The Fight for Education Freedom and the Future of the American Child," in Las Vegas at the FreedomFest conference on July 14, 2022. (Screenshot via EpochTV)
Education & Family News

School Choice Benefits All Students and Teachers, Including Those in Public Schools: Betsy DeVos

Parents will ensure that Arizona’s universal school choice law is emulated across the country, DeVos said.
By Masooma Haq

For over two decades, former U.S. Education Secretary Betsy DeVos has promoted policies including school choice to enable parents to direct their children’s education for improved outcomes. DeVos’s new book, “Hostages No More: The Fight for Education Freedom and The Future of the American Child,” lays out her solutions to fixing the United States’ antiquated industrial model of education.

During an interview for EpochTV’s “American Thought Leaders” program, DeVos commented on the school choice legislation recently enacted in Arizona.

“That means that for all 1.1 million students in Arizona, if their families decide that the school to which they’re assigned is not working for them, they can take 90 percent of what the state would spend on that child and use it to buy that child’s education,” said DeVos.

Betsy DeVos: Why the US Department of Education Should Be Abolished

Ducey’s office said the state will provide more than $6,500 per child per year to be used for the education of their choice.

The new policy will change the life trajectories of thousands of kids, DeVos said.

“I’m very excited about that,” she said. “I’m also excited about how that’s going to continue to build momentum in other states for the policy changes necessary to do that same thing.”

Although the overall impact of online schooling during the COVID-19 pandemic was detrimental to students, the virtual classes allowed parents to witness the substandard curriculum being used in their children’s schools.

“Parents, again, have had front row seats to that in the last couple of years, and they’ve seen if distance learning was just the ticket for their child, or if it was a disaster,” DeVos said.

During the pandemic, many parents replaced their public school learning with homeschooling, cooperative schools, and various other school alternatives, she said.

“We should support those and many more, who are suddenly attracted to something different because they’ve seen the opportunities,” said DeVos.

Not only will school choice lead to creative solutions to learning, but public schools will have to raise their standards to compete with the new school choices.

It’s not only students and parents who are looking for alternatives to the traditional school system.

Many teachers have also become frustrated with public schools, said DeVos, but in an environment of educational freedom, teachers will become the most valuable part of the equation, she added.

DeVos contends that the U.S. Department of Education (DOE), the agency she formerly led, should not exist.

“There is no compelling reason for having a federal Department of Education,” she said.

DeVos said former President Jimmy Carter created the DOE in 1979 as a payoff to teachers unions, and that after spending over $1 trillion with the stated goal of closing achievement gaps, the achievement gaps between students have only widened.

There are two things the federal government must ensure for school students: that their civil liberties are not violated and that those with disabilities are treated fairly, said DeVos. But those protections don’t have to be enforced through the DOE, she said.

“This is the ideal time for states to change their policy to support funds going to the families for their children’s education, not to systems or buildings that are going to simply double down on doing the same thing the same way, over and over again, with more money, and expect different results,” said DeVos.

DeVos said only about 9 percent of public school funding comes from the federal government, and yet the federal regulations and policies that directly impact state and local education far exceed that 8 or 9 percent.

“K–12 education is the least disrupted industry in our country,” she said. “And it is an industry. We spend $750 billion a year on K–12 education and we continue to get poorer and worse results, in spite of the fact of spending more and more and more money.”

“I’m suggesting all states adopt policies that are going to give parents and families the freedom to direct their children’s education, to choose where their child gets their K–12 education,” said DeVos.

DeVos said Arizona is the latest state to implement school choice, but some other states, including Florida, Indiana, Louisiana, Wisconsin, and Ohio, have some significant form of school choice.

Many of the regions that have implemented school choice have seen increased standards and educational outcomes for students who go to both alternative schools and public schools.

“It’s a win-win for everyone,” she said.