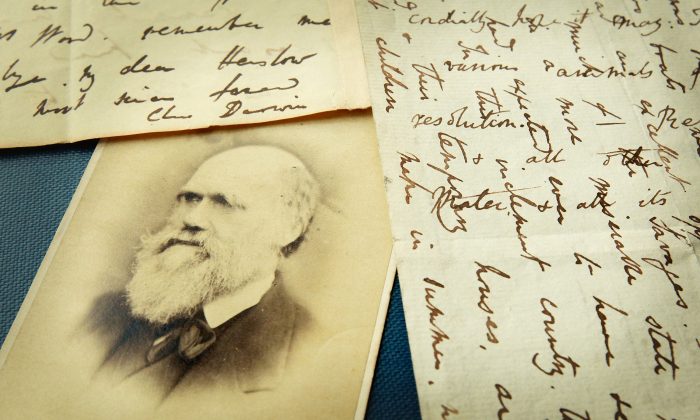 Original letters from Charles Darwin are displayed at the Herbaruim library at the Royal Botanic Gardens in London, UK, on March 25, 2009. (Peter Macdiarmid/Getty Images)
UK

School Cancels Play About Darwin and Evolution After Parents Complain

An elementary school in Britain has canceled a play about Charles Darwin and his theory of evolution following complaints from a group of parents on grounds the performance disparages the perspective of creationism.

Several families at Hartford Manor Primary School, a school in a village in Cheshire, threatened to withdraw their children from the play because they felt one of the scenes mocked a bishop involved in a historic debate on evolution, according to the Independent.

School officials told the BBC that the decision to cancel the play—called Darwin Rocks—came in the wake of six “expressions of concern” from parents. The performance—a version of the musical aimed at 7- to 11-year-olds—was due to be performed by about 90 students at the non-religious school.

School headteacher Simon Kidwell told the BBC that “there were concerns about caricature” of the creationist viewpoint, adding that the people who lodged the complaint—including a science teacher from another school—felt the play mischaracterized Christian views on science.

“The pacy script pops with good-natured humour and flamboyant characters,” according to a trailer by Musicline School Musicals featuring play’s creator Steve Titford talking about the musical.

“The result is a singalong sensation,” the promotional note reads, “handling Darwinism carefully for thinkers from all walks of life,” adding that audiences can expect “seven stirring songs that burst with fresh energy.”

But some of the parents—identified in the Independent report as Christian—apparently saw some of the content as too fresh. In addition to concerns about the play allegedly deriding creationism, the parents voiced reservations about a song in the show that references “bumping and grinding,” a sexually suggestive dance move.

Alan McDonald, a parent at the school who supports the production, was cited by the Independent as saying that “it is something that I think children should be learning about and this vehicle that they use is good.”

McDonald, a scientist, added that cancelling the performance “doesn’t seem evenhanded or in any way right.”

The headteacher of Hartford Manor Primary later said “in hindsight I think that was a hasty decision. We could have put more effort into looking at whether we could have adapted it to make sure it was inclusive of everybody.”

Mike Smith, managing director at Musicline, told the BBC that the company had originally “asked Steve Titford—a practising Christian—and the writer of Shakespeare Rocks to write a factual musical about Charles Darwin’s life and beliefs.”

Smith said the musical had been performed in schools since 2017 and has been “received with enthusiasm.”

Opposition to the play rests in part on its allegedly pejorative treatment of the figure of English bishop Samuel Wilberforce, a staunch critic of evolution.

Wilberforce was one of the prominent figures taking part in a public discussion—known as the “1860 Oxford Evolution Debate“—challenging the validity of the nascent theory put forward by Charles Darwin that man descended from ape.

According to an account published by the Oxford University Museum of Natural History (OUM) (pdf), one of the showdown moments of the debate was a clash between Wilberforce and biologist Thomas Huxley that saw the bishop allegedly poke fun at the scientist for claiming ancestry from a monkey.

“An account of the debate written thirty years after it happened,” the OUM writes, “has Wilberforce taunting Huxley by asking him whether ‘it was through his grandfather or his grandmother that he claimed descent from a monkey?’”

The OUM points out, however, that the details of events around the debate may not have been accurately reported. In particular, the OUM account challenges the view of Wilberforce as a figure who lacked scientific arguments in the debate and instead relied on derisory, ad hominem attacks.

The OUM notes that Wilberforce was “a renowned as an eloquent and influential speaker, primarily on clerical topics,” but “also had a first class degree in mathematics and was a Fellow of the Royal Society.” The account goes on to say that before the confrontation of the debate took place between the bishop and Huxley, Wilberforce “had written a review of Darwin’s On the Origin of Species, in which he emphasised that his rejection of the theory was ‘solely on scientific grounds’, and that he had no sympathy with those whose objections were on the grounds that it contradicted what was ‘taught by Revelation.’”