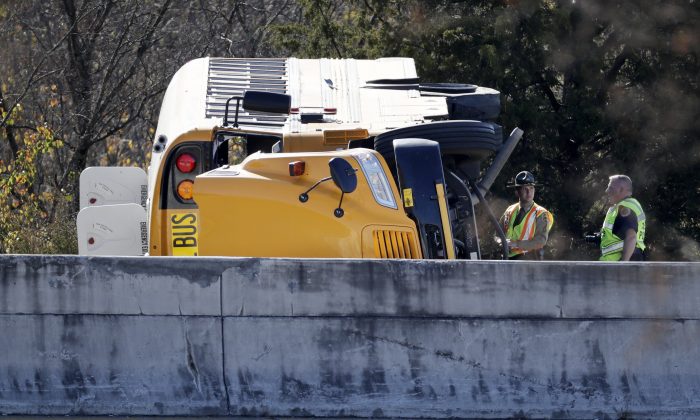 Officials work at the scene of a school bus crash on an interstate highway off-ramp Friday, Nov. 18, 2016, in Nashville, Tenn. Authorities say multiple students were injured, all of whom are expected to survive. (AP Photo/Mark Humphrey)
US

NASHVILLE, Tenn.—Authorities say a school bus crashed and rolled over on an interstate off-ramp in Nashville, sending 23 students to the hospital, all of whom were expected to survive.

Haas says a 17-year-old student received the most serious injury, a broken collarbone. Two other students had arm injuries.

Nashville Police spokesman Don Aaron says 43 students were on the bus, along with two chaperones and the driver. The bus was on its way to a convention of the Beta Club, an academic and community service organization, at the Gaylord Opryland Resort in Nashville.

Aaron says the bus has been in service for a year.