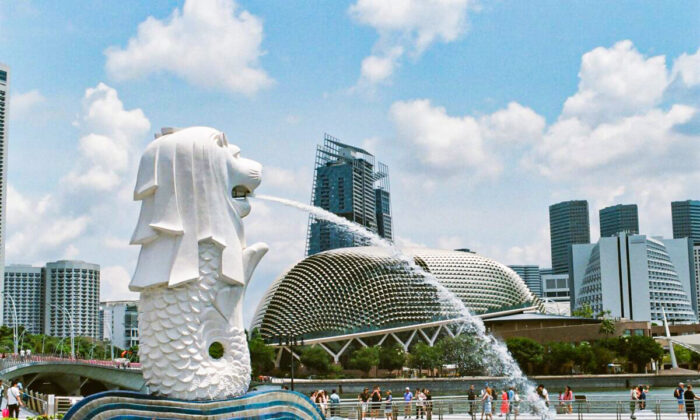 A view of the Merlion sculpture in Singapore. (Courtesy of Unsplash, Jisun Han.)
HK Current Affairs

The wave of mass migrations from Hong Kong continues, and the pandemic measures have also discouraged foreigners from coming to Hong Kong. Singapore, which has always been regarded as a competitor to Hong Kong, has recently launched a new work visa program to attract talents. Scholars commented that it “gave an extra punch” to Hong Kong.

Singapore’s new visa targets high-income foreigners with a monthly salary of 30,000 Singapore dollars (US$21,500) or above. They can apply for a five-year work visa, and their family members can also live or even work there. The Singaporean government said that if they have outstanding achievements in sports, arts, science, and other sectors, even if their monthly salary is below the requirement, they will be granted visas after review.

Benson Wong Wai-kwok, former assistant professor of politics and international relations at Hong Kong Baptist University, said that the two cities are both export-oriented economies, and they are competing with each other, “one picks up what the other discards.” But starting from the former Chief Executive of Hong Kong Leung Chun-ying, all the Chief Executives did not have the ability to solve the structural problems Hong Kong was facing.

“It is very obvious that Hong Kong is not attractive compared with Singapore.” The Singaporean government has observed the pandemic in Hong Kong, and the launch of the national security law in 2020, they “give an extra punch” to Hong Kong as they are attracting Westerners who were originally based in Hong Kong to relocate their headquarters to Singapore.

It is expected that the number of unemployed in Hong Kong will increase, or “economic bloodletting” will cause social unrest.

Benson explained that “economic bloodletting” refers to human resources, the rule of law, a fair business environment, and international connections. Hong Kong “does not have these things anymore now,” making “Hong Kong the same as [mainland] China.”

For example, the world does not believe that Hong Kong’s courts will fairly handle commercial disputes between foreign and mainland China companies, and the Hong Kong government follows the mainland’s “dynamic Zero-COVID strategy, which is getting more insane.”

Foreigners who do not come to Hong Kong go to Singapore instead, where they have better legal protection.

Benson said the extreme Zero-COVID policy in mainland China is making China more and more isolated from other countries, and Hong Kong as part of China is suffering the same. International talents rather choose Singapore which is more politically stable and open.

In addition, due to the downturn of the mainland’s economy, Hong Kong’s previous role as its agent has been weakened. “The customer [China Market] also is not doing well, Hong Kong can be described as a ‘broken bridge,'” and therefore Singapore “won without doing anything.”

Law Ka-chung, the economist, said on the online program of D100 (internet radio station of Hong Kong) that overseas elites did not prefer Singapore 10 years ago. At that time, “Hong Kong’s environment was relatively better, and the economy of the mainland was booming. People might think that Hong Kong’s prospects were better than Singapore’s. Singapore has a dictatorship government and freedom is restricted.” But after ten years, the situation in Hong Kong has declined sharply. “People make their wise choices, Hong Kong was just a bit better than Singapore in the past, and now it is obvious that Hong Kong is worse than Singapore.”

Although the Quality Migrant Admission Scheme in theHong Hong Policy Address will be released in October, it is expected the effect will be less attractive.

Law said that the previous Policy Addresses had measures to attract talents,  but under the current environment, people from overseas will not come again.

Benson estimated that the so-called Quality Migrant Admission Scheme will attract some people from the mainland, North Korea, Iran, Pakistan, and these underdeveloped countries, and then constantly attract these people with money, but they are less helpful to Hong Kong.

Meanwhile, in response to the continuous decline in the population of primary and secondary school children, Tang Fei, a member of the Legislative Council and vice-chairman of the Hong Kong Federation of Education Workers, proposed last month to introduce students from mainland China or Southeast Asia to study in Hong Kong and pay their tuition fees.

Benson said that these suggestions are “out of mind.” If students in Southeast Asia focus on English learning, they will go to Singapore or Malaysia, and those who focus on Chinese learning will go to Taiwan, where the living index is low.

What happened in Hong Kong in recent years has been reported by foreign media. It has changed foreigners’ perceptions of Hong Kong.

Up till now, Hong Kong’s border to the world has not yet reopened since the outbreak of the pandemic; while most places in the world have been “reopened” and the entry and exit restrictions have been eased.

According to the recruitment firm Robert Walters, more than 700 financial professionals moved from Hong Kong to Singapore last year.

In addition, the Hong Kong Investment Funds Association surveyed 36 fund management companies last month, and two-thirds of them described attracting oversea talents to Hong Kong or staying in Hong Kong for global and regional positions as “extremely difficult” or “difficult;”

Nearly 70 percent of the companies said it is “extremely difficult” or “difficult” to recruit foreigners to work in Hong Kong.

More than 97 percent of the companies replied that reopening Hong Kong’s border to the world is the key to regaining Hong Kong’s competitiveness and enhancing its attractiveness to talents, and it is also a basic condition for being an international financial center.

Societe Generale, with its Asia-Pacific region headquartered based in Hong Kong, had reached an agreement with the Singaporean government in May to allow the company to relocate at least 12 bankers from Hong Kong to Singapore, describing their employees in Hong Kong are “eager to escape from the strict pandemic restrictions on Chinese territory,” reported by the Financial Times.

In addition, Bank of America, JP Morgan Chase, and Citibank have transferred employees from Hong Kong to Singapore.