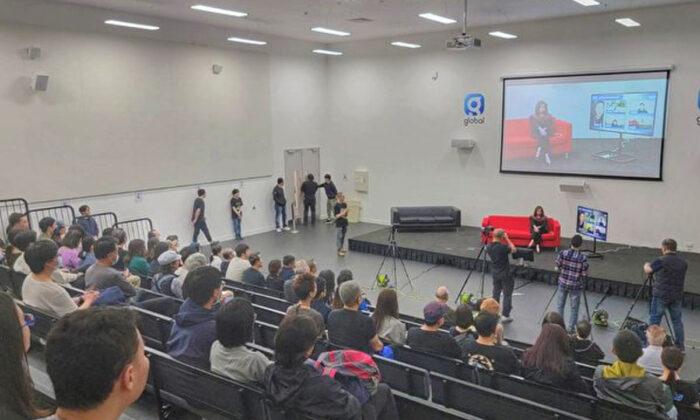 On 12 June 2019, Carrie Lam, her office and the Legislative Council completely ignored the public opinion, and forcibly resumed the second reading of the amendments to the Fugitive Offenders Ordinance in Defiance.

Who would have thought that Hongkongers can no longer hold any June 12, (612) commemoration events three years later?

Some migrant scholars also announced their establishment of a civil education platform, hoping the next generation can inherit the true, authentic history and universal values of Hong Kong.

“Repower HK: Rebuilding Hong Kong Civil Society” is an event organized by a group of migrant media professionals. Unfortunately, the event had sparked controversy online, by people saying it was not appropriate as a rememberance. It was held for two consecutive days at the Global Academy in Hayes, London, UK.

There were in total, seven workshops and about 30 flea market booths.

The panel’s topics comprised: The Rapid Collapse of Hong Kong Civil Society, Dissect the Causes of Death and Forecast Future Directions, How Do New Immigrants Face Life Challenges and Opportunities? Will The Identity of Hongkongers Be Forgotten? How Can Hong Kong Culture Be Inherited?

Some netizens criticized the said the event had turned protests into a carnival. They also pointed out that June 12 is “Hong Kong Remembrance Day,” so it should have been an assembly or rally.

One of the seminar guests, Tsang Chi-ho, said in an interview with our reporter that he appreciates the different expectations people have of 612. However, he felt the most crucial thing was to stop pointing fingers at each other.

Tsang expressed his gratitude to the fact that there are still plenty of events, held by different camps to commemorate the protests. “Shouldn’t we recognize the organizers’ efforts, instead of dividing ourselves? I thought the seminars were purposeful. It brought so many overseas Hongkongers from all walks of life together, which is the greatest comfort for Hongkongers who have experienced the 2019 movement.”

In another interview with our Epoch Times reporter, Rayman Chow Wai-hung,  former legislator of Kwai Ching District pointed out, “One of the goals is to explore what Hong Kong media professionals can do overseas and how they can speak up for Hong Kong.”

Chow continued, “These kinds of events unite Hongkongers. When you see each other, it soothes our helplessness. Besides, we can still show Hongkongers who remain in Hong Kong that they are never forgotten.”

At around 3:00 p.m. on June 12, the organizers paused all the activities in the venue. Emcee Chow Wai-hung led attendees to observe a minute of silence to express their condolences and thoughts for the wounded, the departed and for siblings (brothers and sisters), who are still alive but imprisoned due to the 2019 anti-extradition movement.

As for the roughly 30 market stalls on-site, they could be generally divided into two categories. The first category was sales of products and services, such as Hong Kong-style food, clothing and handicrafts with prints of anti-extradition designs, haircuts, massage treatments, and the like.

The second category was exhibitions, such as job referrals, social welfare agency services, exhibits of social movement designs, books, Apple Daily items, and presentations of the history of Hong Kong.

In response to the criticisms of this event from netizens, Chris, who is the owner of a booth selling handicrafts, shared his thoughts.

Katherine, a merchant who sells ceramic tableware, also believed that there are many ways to commemorate 612. This event focused on the seminar, not the flea market. Instead of treating the event like “a carnival,” those who attended the event still remember the entire movement and have 612 engraved in their hearts.

Three scholars who moved to the UK in the past 2 years, Benson Wong Wai-Kwok, Hans Yeung Wing-yu, Chung Kim-wah, held an online press conference on Jun 12. They announced the establishment of “Citizens of Our Time Learning Hub” (COOTL), to counter Hong Kong’s brainwashing education system through writing and videos.

They pointed out that Hong Kong had been facing severe political oppression and shrinking civil rights. One of the most severe is that the next generations will be bound by brainwashing in Hong Kong.

They were also talked about the fears of history being erased and universal values depreciated.

It became intolerable for schools and teachers to play their professional roles under such high pressure. It had caused a shakedown of essential values in a civilized society.

Therefore, the three musketeers Wong, Yeung, Chung, founded COOTL with other migrant Hongkongers. The group wanted to conserve the truth for the next generations, bringing the power of dispersed Hongkongers together.

There are two aspects of the COOTL curricula.

Firstly, the platform aims to provide Hong Kong parents, teachers and students learning elements outside of the normal curriculum; to preserve history truthfully and reflect the societal environment as it happened; to counter narrow viewpoints distorted by political propaganda.

Secondly, the scholars hope to provide scattered Hongkongers overseas a proper platform to learn by self-reflection and deep exploration on the future of Hong Kong and Hongkongers.

There are six categories on its website. The first one is described as “focusing on preserving history and reflecting the current social situation factually,” plus discussing the social development of Hong Kong and the future of Hongkongers.

The next two read as introducing a variety of cultural materials such as books, movies and music that highlight universal values, while employing fables to trigger societal re-evaluation, its absurdity as well as possibilities of the future, The column also mentioned using various themes of characters to examine Hong Kong’s cultural and core values.

Last but not least, the platform aims to provide teachers and students with general education courses.