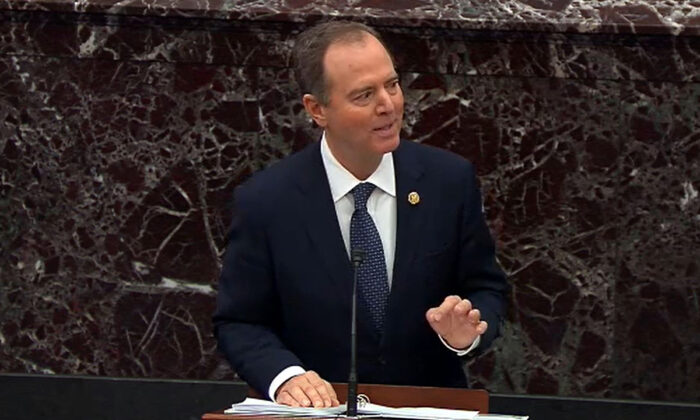 In this screengrab taken from a Senate Television webcast, House impeachment manager Adam Schiff (D-Calif.) speaks during impeachment proceedings against President Donald Trump in the Senate at the U.S. Capitol in Washington on Jan. 22, 2020. (Senate Television via Getty Images)
Impeachment Trial

Schiff Tells Senate: ‘I Don’t Know Who the Whistleblower Is’

House impeachment manager Rep. Adam Schiff (D-Calif.) was asked about an alleged relationship between his staff and the whistleblower who triggered the impeachment inquiry against President Donald Trump.

“I don’t know who the whistleblower is. I haven’t met them,” Schiff told the Senate on Wednesday, adding that neither he or his staff coached the person.

“I am very protective of my staff as I know you are,” Schiff, chairman of the House Intelligence Committee, said. “The whistleblower did exactly what they should,” he added.

During the public impeachment inquiry hearings in November, the House Intelligence Committee voted against calling up the whistleblower to testify. The anonymous person highlighted concerns about a July 25 phone call between Trump and Ukrainian President Volodymyr Zelensky, but did not directly hear the phone call.

In October 2019, Schiff told CBS News that he should have been more clear about his staff’s contact with the whistleblower following news reports that claimed he “learned about the outlines” of the complaint “days before” it was filed. His office confirmed early that month that the whistleblower approached House Intelligence Committee staff before the complaint was filed, effectively giving Democrats in the House advance warning of the accusations.

Trump said that same month that he believes Schiff “knew long before, and he helped write it too,” referring to the whistleblower complaint to the Intelligence Community Inspector General about the July 25 phone call.

The whistleblower’s lawyer, Mark Zaid, has previously said that his client has never met or spoken with Schiff about the matter.

Trump’s lawyer Patrick Philbin also issued remarks about the anonymous complaint in Wednesday’s Senate session and whether there was alleged coordination effort between National Security Council (NSC) officials and the whistleblower.

“The only knowledge that we have … comes from public reports,” Philbin said. “I gather there is a news report … that suggests a name for the whistleblower, suggests where he worked … at that time while detailed at the NSC staff for then Vice President Biden and that there were others who worked there. We have no knowledge of that other than what is in those public reports, and I don’t want to get into speculating.”

He added the White House doesn’t know what Schiff’s “contact with the whistleblower has been.” More information “would seem to be relevant since the whistleblower started this entire inquiry,” he said. Any possible “motivations, bias, how this was all created, could potentially be relevant,” Philbin said.