Schiff, Swalwell, Omar Vow to ‘Stick Together’ As McCarthy Blocks Them From Committees 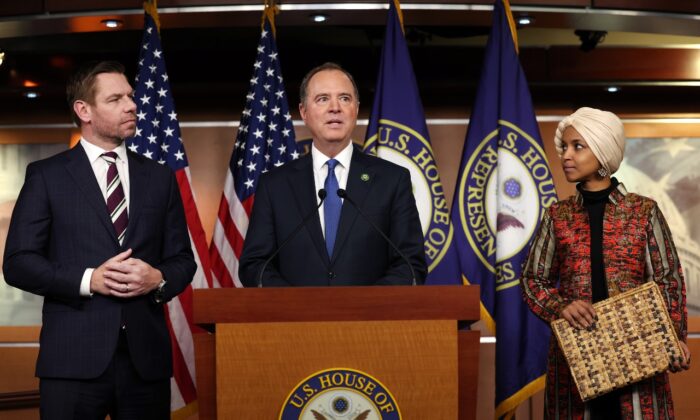 On Jan. 24, McCarthy formally rejected House Minority Leader Hakeem Jeffries’ (D-N.Y.) nominations of Schiff and Swalwell for the House Intelligence Committee, of which both congressmen were members in the last Congress and Schiff chaired.

McCarthy has also promised to keep Omar off the Foreign Affairs Committee, where she previously served.

“Throughout this journey of vengeance, the three of us have chosen to stick together because this isn’t about any individual committee assignment,” Swalwell said at a joint press conference in Washington on Wednesday. “This is about an institution where the Speaker of the House is using his power to go after his political opponents and to pick them off the field.”

Adding that he and his two colleagues had received death threats, Swalwell alleged McCarthy had intended that to be the case.

“Even though we have said publicly that these smears are bringing death threats, he continues to do it, which makes us believe that there’s an intent behind it,” Swalwell said. “But we will not be quiet; we’re not going away. I think he’ll regret giving all three of us more time on our hands.”

Since November, McCarthy has openly shared his plans to block the three Democrats from their committees. In defense of that decision, McCarthy has maintained that Schiff “lied to the American people” and that Swalwell’s previous association with a suspected Chinese spy has compromised him. As for Omar, the speaker has cited the congresswoman’s “repeated anti-semitic and anti-American remarks” as a reason not to allow her on the Foreign Affairs Committee.

Omar, in her Wednesday remarks, noted: “As a child who survived war, lived in a refugee camp, I would have never imagined that I would have the opportunity to serve on a Subcommittee on Africa, Global Health, and Human Rights. I would not have believed that I would one day not just serve as the first African-born member of Congress, but on a committee that oversees policies towards the continent.”

Describing McCarthy’s move as a “political stunt,” Omar said she felt it threatened national security and “the integrity of our Democratic institution.”

Schiff, meanwhile, alleged that McCarthy was not acting of his own accord but on the orders of former President Donald Trump.

Minority Leader Hakeem Jeffries (D-N.Y.) formally nominated Schiff and Swalwell for the Intelligence Committee on Saturday, contending that they were “eminently qualified” for the panel and that blocking them would constitute a departure from the “longstanding House tradition of deference to the minority party Intelligence Committee recommendations.”

On Tuesday, McCarthy replied to Jeffries’ letter with one of his own, notifying the Democrat leader that he had not changed his mind.

“I appreciate the loyalty you have to your Democrat colleagues, and I acknowledge your efforts to have two Members of Congress reinstated to the House Permanent Select Committee on Intelligence,” McCarthy wrote. “But I cannot put partisan loyalty ahead of national security, and I cannot simply recognize years of service as the sole criteria for membership on this essential committee. Integrity matters more.”

Officially rejecting Jeffries’ appointments of Schiff and Swalwell, the speaker added that he felt the “misuse” of the Intelligence Committee under the previous two Congresses had undermined its primary aims of oversight and national security, “leaving our nation less safe.”

“Therefore, as we enter a new Congress, I am committed to returning the Intelligence Committee to one of genuine honesty and credibility that regains the trust of the American people,” he concluded.

McCarthy has the authority to block Schiff and Swalwell from the Intelligence Committee as it is a select committee. The Foreign Affairs Committee, however, is a standing committee, so a full vote of the House would be required to block Omar’s appointment—a challenge that could prove difficult given the Republicans’ slim majority.

While many Republicans will undoubtedly join McCarthy in blocking Omar, some have vowed to oppose the effort.

“Two wrongs do not make a right,” Rep. Victoria Spartz (R-Ind.) said in a Tuesday statement. “Speaker Pelosi took unprecedented actions last Congress to remove Reps. Greene and Gosar from their committees without proper due process. Speaker McCarthy is taking unprecedented actions this Congress to deny some committee assignments to the Minority without proper due process again.

“As I spoke against it on the House floor two years ago, I will not support this charade again,” Spartz continued. “Speaker McCarthy needs to stop ‘bread and circuses’ in Congress and start governing for a change.”

In December, Rep. Nancy Mace (R-S.C.) told Axios that she would not support the move either, while Reps. David Valadao (R-Calif.) and Andy Barr (R-Ky.) have also expressed distaste for the idea.