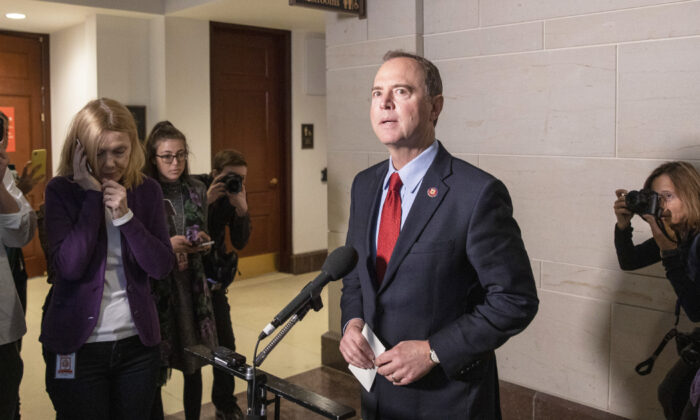 Schiff on Whistleblower Contact: ‘I Should Have Been Much More Clear’

Rep. Adam Schiff (D-Calif.) said he should have been more transparent about the contact his committee had with a whistleblower that ultimately triggered an impeachment investigation.

He was responding to a question from CBS News host Margaret Brennan, who asked him: “Do you regret saying that we, the committee, weren’t in touch with the whistleblower?”

“I should have been much more clear,” Schiff told CBS on Sunday.

Schiff then said, “And I said so the minute it was brought to my attention that I was referring to the fact that when the whistleblower filed the complaint, we had not heard from the whistleblower. We wanted to bring the whistleblower in at that time. But I should’ve been much more clear about that.”

Several weeks ago, Schiff, the chairman of the House Intelligence Committee, said that his committee hadn’t directly spoken to the whistleblower.

His office earlier this month confirmed that the whistleblower approached House Intelligence Committee staff before the complaint was filed, effectively giving Democrats in the House advance warning of the accusations. It came after The New York Times reported that Schiff allegedly “learned about the outlines” of the complaint “days before” it was filed. The whistleblower’s attorneys said the person never spoke to Schiff about the matter.

The aide told the whistleblower to follow the standard procedure, which includes hiring a lawyer and filing a complaint in the intelligence community. The aide then told Schiff about the conversation, the NY Times reported.

House Democrats have entered week four of their inquiry as they investigate President Donald Trump and other White House staffers, accusing Trump of pressuring Ukraine to investigate former Vice President Joe Biden and his son, Hunter. Trump has denied the claims.

A declassified transcript of a July 25 call between Trump and Ukrainian President Volodymyr Zelensky, released by the White House on Sept. 25, quotes Trump as saying, “There’s a lot of talk about Biden’s son, that Biden stopped the prosecution and a lot of people want to find out about that so whatever you can do with the Attorney General would be great.” From the transcript, Trump does not appear to pressure Zelensky or offer any quid pro quo.

Schiff, in the Sunday interview, said that Congress might not seek testimony from the whistleblower, who is said to be part of the intelligence community.

“Given that we already have the call record, we don’t need the whistleblower, who wasn’t on the call, to tell us what took place during the call,” Schiff said. “We have the best evidence of that.”

“I don’t know why a person that defrauds the American public should be protected, OK?” the president asked.

Meanwhile, the Washington Examiner reported that in congressional testimony, the Intelligence Community’s inspector general, Michael Atkinson said the person showed “some indicia of an arguable political bias … in favor of a rival political candidate.”

The same news outlet reported that the whistleblower had a “professional tie” to Biden. A retired CIA officer added to the Washington Examiner, “From everything we know about the whistleblower and his work in the executive branch then, there is absolutely no doubt he would have been working with Biden when he was vice president.”

Lawyers for the person denied the report, telling ABC News that he hadn’t “worked for or advised a political candidate, campaign, or party.”

“Our client has spent their entire government career in apolitical, civil servant positions in the Executive Branch,” the lawyers stated.