Schiff Stands by Belief That FISA Probe on Page Was Legitimate 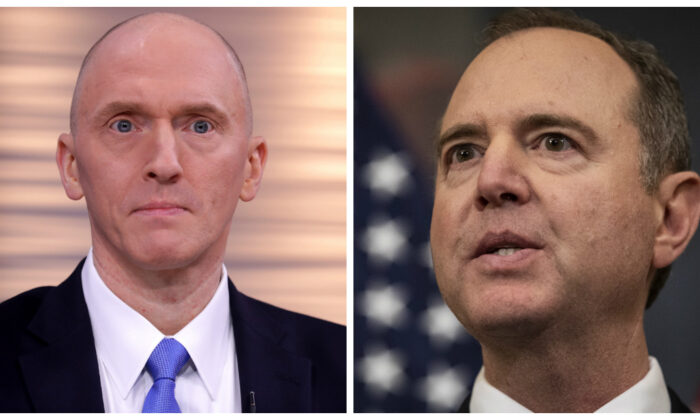 Left, former Donald Trump campaign aide Carter Page participates in a discussion on 'politicization of DOJ and the intelligence community in their efforts to undermine the president' hosted by Judicial Watch at the One America News studios on Capitol Hill in Washington on May 29, 2019. (Chip Somodevilla/Getty Images) On the right, House Intelligence Chairman Adam Schiff (D-Calif.) speaks during a press onference after the House of Representatives voted to impeach President Donald Trump on Dec. 18, 2019. (Drew Angerer/Getty Images)
By Zachary Stieber

House Intelligence Committee Chairman Adam Schiff (D-Calif.), who insisted that Republicans were wrong about abuse of the FISA court, and who read salacious, unconfirmed claims about Trump 2016 campaign associate Carter Page during a congressional hearing, indicated he has no sympathy for Page.

A report from Department of Justice (DOJ) Inspector General Michael Horowitz showed rampant abuse of the Foreign Intelligence Surveillance Act (FISA) system, including the bombshell that an FBI lawyer changed a detail in an email that contained exculpatory information about Page.

Horowitz’s team also found that the FBI relied on former British intelligence officer Christopher Steele’s dossier to apply to spy on Page without verifying the information and even as Steele conceded that a source was unreliable. That source later told agents they were passing along a rumor when discussing some of the details Steele included in the dossier, which has been largely debunked.

Page was spied on for a year and was widely reported to be an agent of Russia, a charge that lacked evidence, Horowitz concluded. Schiff helped promote the campaign against Page by reading out accusations from Steele during a 2017 committee hearing.

When Republicans said in a memo the next year that there was FISA abuse, Schiff released a counter-memo claiming, “FBI and DOJ officials did not abuse the Foreign Intelligence Surveillance Act process, omit material information, or subvert this vital tool to spy on the Trump campaign.”

During an interview with PBS’ “Firing Line,” Schiff declined to offer sympathy for Page, saying: “I have to say Carter Page came before our committee and dissembled for hours of his testimony, denied things that we knew were true, later had to admit them during his testimony.”

Page responded in a statement on Twitter, saying: “There have been various allegations of dishonesty regarding FBI lawyer [Kevin] Clinesmith. On information, belief and firsthand experience since 2017, I have actually found @RepAdamSchiff to be even more untrustworthy and dangerous with his misuse of @DNC lies.”

There have been various allegations of dishonesty regarding FBI lawyer Clinesmith. On information, belief and firsthand experience since 2017, I have actually found @RepAdamSchiff to be even more untrustworthy and dangerous with his misuse of @DNC lies:https://t.co/kMkRYFceGs

For the second time in recent days, Schiff declined to say he regrets his bold claim about the FBI’s spying on the Trump campaign.

“I don’t regret that because at the time, that’s what we knew. Now, two years later, 170 interviews later, 2 million documents later, we learn there were serious problems. I will also say though that at the time two years ago, and since, I have continued to make the point that the investigation was properly initiated,” Schiff said.

He wasn’t asked about his differing conclusion on FISA abuse, even as he viewed the same information as Republicans did. Horowitz did find that the probe met the low bar that the FBI had in place.

Schiff said during the interview that the FBI didn’t rely on the Steele dossier. However, Horowitz said that the dossier played an “essential” role in FBI obtaining spy warrants on Page.

“Well, look, it is certainly true that two years ago when we looked into this matter, we weren’t aware that a low-level FBI lawyer had misstated information on the FISA application. There was no way for us to know that at the time,” Schiff said on “Firing Line,” referring to Clinesmith, the primary FBI attorney on the Trump–Russia investigation.

Clinesmith removed key information from an email that showed that Page had worked with the CIA for years. Clinesmith has since been referred for criminal prosecution. Overall, Horowitz found 17 “significant errors or omissions” in the four applications to get warrants to spy on Page. There were more errors made regarding Woods procedures—internal guidelines that require evidence to back up claims made to the FISA court.

Schiff also said that Horowitz found that the probe into Page “was not driven by political bias.” However, Horowitz told Congress that because his team received “unsatisfactory” answers on a lot of issues, he couldn’t rule out political bias influencing the myriad of alleged mistakes.

In fact, he told lawmakers last week that text messages obtained by his team showed “evidence of people’s political bias.”