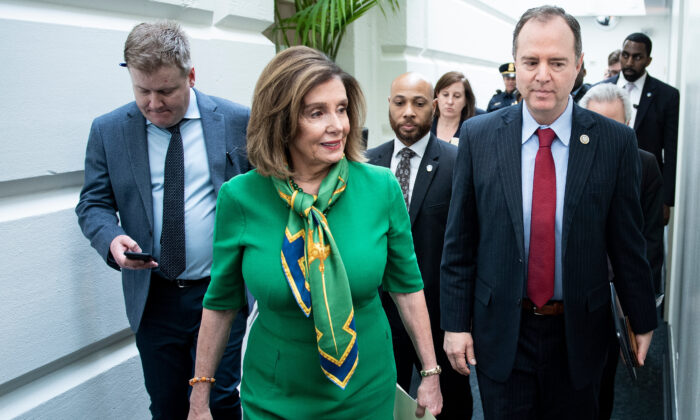 Schiff, Nadler Among Those Chosen to Present House’s Impeachment Case to the Senate

“The emphasis is on litigators,” Pelosi said about the House managers at a press conference in Washington on Jan. 15. “The emphasis is on comfort level in the court room. The emphasis is making the strongest possible case to protest and defend our Constitution, to seek the truth for the American people.”

She said she was “proud and honored” that the seven representatives agreed to be House managers.

Pelosi called Wednesday “an important day for us.” As she withheld the impeachment articles from the Senate for over three weeks, Pelosi said new evidence has emerged bolstering the House’s case.

In a statement before Pelosi’s announcement, Schiff said, “Today, we take the next step to Defend Our Democracy, sending articles of impeachment to the Senate.”

“McConnell will have a choice: stand with the Constitution, or with Trump’s cover-up. Uphold the rule of law, or help Trump undermine it,” he added, referring to Senate Majority Leader Mitch McConnell (R-Ky.).

The House was slated to send the articles of impeachment against Trump to the Senate on Wednesday, over a month after voting to impeach the president. Pelosi said over the weekend that the delay produced “postive results.” McConnell said the delay “achieved absolutely nothing.”

At the same time that House Democrats held a press conference, McConnell said on the Senate floor: “If the Senate blesses this unprecedented and dangerous House process by agreeing that an incomplete case and a subjective basis are enough to impeach a president, we will almost guarantee the impeachment of every future president of either party when the house doesn’t like that person.”

“This process of last constitutional resort will be watered down into the kind of anti-democratic recall measure that the founding fathers explicitly, explicitly did not want. The Senate was designed to stabilize our institutions, to break partisan fevers, to stop short-term passions from destroying our long-term future. House Democrats may have descended into pure factionalism, but the United States Senate must not. This is the only body that can consider all factors presented by the House, decide what has or has not been proven, and choose what outcome best serves the nation,” he added.

The Senate will hear the case and decide whether to convict or acquit the president.

An acquittal requires a simple majority while a conviction, or removal from office, requires a supermajority of 67 votes. No president in the history of the country has been removed from office through impeachment.

The trial will likely begin on Jan. 21, McConnell said on Tuesday. Senators will hear both sides present their cases and then submit written questions. They’ll vote later in the proceeding on whether to call any witnesses.

Trump, meanwhile, tapped Pat Cipollone, his White House counsel, to lead his defense in the trial.

“He’s the strong, silent type,” Trump said of Cipollone at a recent White House event marking the 150th judicial appointment of his presidency.

“Pat Cipollone will be defending executive power from time to time during the Senate proceedings, which will be swimming upstream from certain segments of the media,” said Leonard Leo, a conservative attorney who has consulted with the Trump administration on judicial nominations and was among those who recommended Cipollone for the White House counsel post.

“He has the courage and determination to make those points and not be cowed by whatever criticism there might be,” Leo said. “Those are the kind of attributes that brought him to the job. Those are the things that mattered to me when asked what I thought of him.”

Jay Sekulow, a Trump personal attorney, will also have a major role on his defense team.