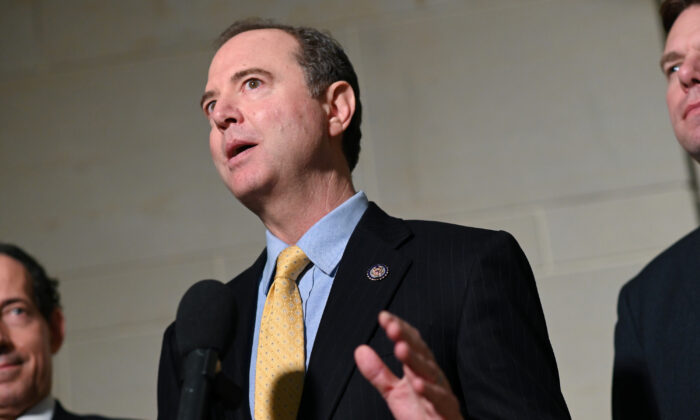 Schiff Insists Impeachment ‘Isn’t a Failure’ Despite Past Comments

Leading House Democrats denied Sunday that their impeachment push has been a failure despite a lack of Republican support and dwindling interest from the public.

House Intelligence Committee Chairman Adam Schiff (D-Calif.) insisted “it isn’t a failure” during an ABC News interview on Sunday. “No, it isn’t a failure, at least it’s not a failure in the sense of our constitutional duty in the House,” he said.

Rep. Jerrold Nadler (D-N.Y.), the House Judiciary Committee chairman whose panel drafted two articles of impeachment, also believes the impeachment push wouldn’t be a failure if not passed in the Senate.

During an interview on Sunday, Nadler was reminded that he previously stated that “before you impeach somebody, you have to persuade the American public that it ought to happen,” including “Trump voters.” No Republicans in the Judiciary Committee panel voted in favor of impeachment while a full vote on a resolution on the impeachment inquiry drew no Republican support.

Nadler was then asked if he failed his own test. “I don’t think so,” he replied.

“The polling shows that about 70 percent of the American people approve of this, but more importantly this is a continuing threat to the integrity of our elections now,” he claimed. Major polls asking Americans if they support impeachment show far fewer Americans believe Trump should be impeached and removed from office, although Nadler was referring to an ABC-Ipsos poll last month showing that 70 percent of Americans thought Trump’s dealings with Ukraine were “wrong.”

“This is not a one-off. Impeachment is not a punishment for past behavior,” Nadler said.

Schiff, in the ABC program, explained why he decided to push for impeachment.

“The threat to our election integrity coming up goes on. It’s a clear and present danger, I think, to our democracy, and not something that we can turn away from simply because the Republicans in the House refuse to do their duty, and continuing to put the person of the president above their personal obligation,” he told ABC’s George Stephanopoulos, a former press secretary for President Bill Clinton.

But Sen. Ted Cruz (R-Texas), who has been staunchly opposed to impeachment, told Stephanopoulos that Trump has the authority to investigate corruption allegations against former Vice President Joe Biden and son Hunter Biden’s dealings in Ukraine. Democrats allege Trump withheld aid to Kyiv in exchange for investigations into the Bidens, which Trump and Ukrainian President Volodymyr Zelensky have both denied. Trump also released a transcript of the call.

“I’m not suggesting that you can cook up fraudulent attacks on your opponents. This would be a very different allegation if someone was say—if the president had said, please concoct something that isn’t real, that—that would be qualitatively different,” Cruz said. “That’s not what the transcript says. The transcript says, investigate what happened. Find out what happened,” said in reference to the July 25 phone call between Zelensky and Trump.

“Jerry Nadler and Adam Schiff are interested in one thing, which is their partisan attacks. You notice they have zero interest in any actual corruption. They don’t want to know what happened during Burisma,” Cruz said, referring to Burisma Holdings, a Ukrainian private energy company where Hunter Biden held a lucrative position as a board member while his father was in office.

House Democrats’ “entire partisan case collapsed” last week as two articles of impeachment were unveiled by Nadler’s committee, he said. “For weeks and months, they have been promising evidence of criminal conduct. They abandoned all of that,” Cruz said.

Schiff said he’s confident the House will vote to impeach the president this week. The articles of impeachment were sent to the House floor after passing the Judiciary Committee last week.

Next year, if impeachment passes, the Republican-held Senate will hold a trial. No president in U.S. history has been convicted and removed by the Senate.