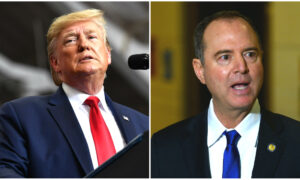 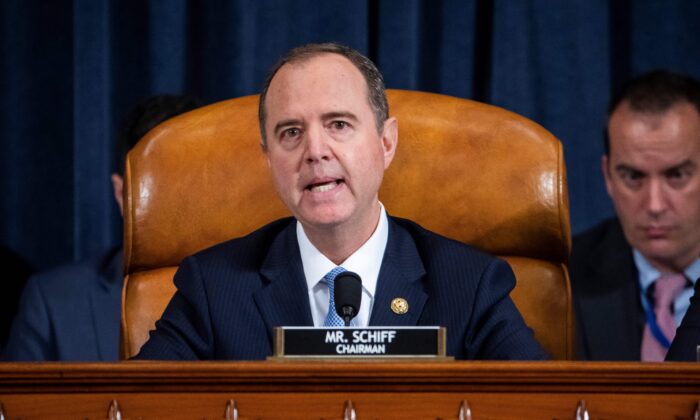 Schiff: ‘I Do Not Know the Identity of the Whistleblower’

House Intelligence Chairman Adam Schiff (D-Calif.) said on Nov. 13 that he doesn’t know who the whistleblower is.

Republican members of the committee during the open impeachment hearing pushed Schiff to subpoena the person who filed a complaint against President Donald Trump to testify in a closed-door hearing.

Schiff said the committee would hold a vote on whether to subpoena the person after two witnesses testified on Wednesday.

Rep. Jim Jordan (R-Ohio), who was recently moved onto the committee, then asked Schiff: “Do you anticipate when we might vote on the ability to have the whistleblower in front of us, something you, out of 435 members of congress, you are the only member who knows who that individual is, and your staff is the only staff of any member of Congress that has had a chance to talk to that individual. We would like that opportunity. When might that happen in this proceeding today?”

“As the member knows, that’s a false statement,” Schiff responded. “I do not know the identity of the whistleblower and I’m determined to make sure that identity is protected.”

Schiff said a motion to subpoena a witness could be made after two witnesses testified.

Rep. Devin Nunes (R-Calif.) attacked Schiff in his opening statement, noting the chairman said on national television that his staff hadn’t spoken to the whistleblower.

“We have not spoken directly with the whistleblower,” Schiff said at the time.

After a report that Schiff knew of the whistleblower’s complaint before it was filed, a Schiff spokesman confirmed that there was contact, and Schiff said he regretted what he said on television.

Schiff told the Daily Beast website that he didn’t know whether the complaint was written by the same person who approached his staff, adding he “should have been much more clear.”

Schiff has also come under fire for fabricating a portion of the transcript of the Trump-Ukraine call and for claiming that he had “more than circumstantial” evidence that Trump colluded with Russia, evidence he never produced or described.

Republicans tried to censure Schiff last month but the vote was blocked by Democrats, who currently control the House.

House Speaker Nancy Pelosi (D-Calif.) has stood by Schiff, saying she’s “very proud of the work that Adam Schiff is doing. I value the way he is conducting this.”