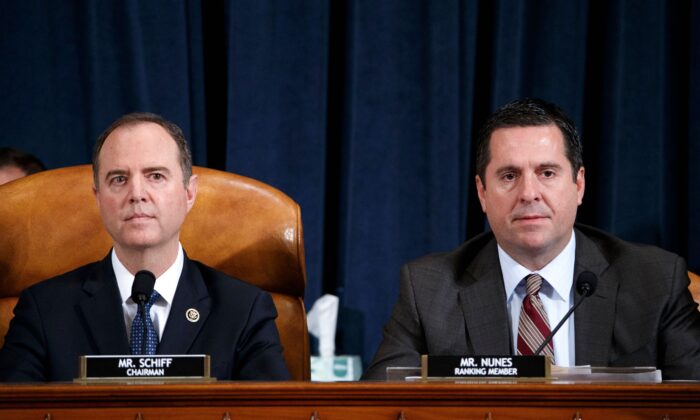 “What would I offer in terms of testimony? That I heard Dr. Hill say such and such?” Schiff asked on CNN’s “State of the Union” on Sunday.

“The only reason [for] them to go through this is to mollify the president and that’s not a good reason to call a member of congress,” Schiff added.

He didn’t go so far as to say he would not testify.

“I don’t want to comment on it,” Schiff said after he was asked about whether he would appear in the Senate trial.

On Saturday, Trump wrote on Twitter that Schiff, who is the head of the impeachment inquiry, may have to testify.

Schiff “will be compelled to testify should the Democrats decide, despite the fact that my presidential conversations were totally appropriate (perfect), to go forward with the Impeachment Hoax,” wrote Trump.

Adam Schiff will be compelled to testify should the Democrats decide, despite the fact that my presidential conversations were totally appropriate (perfect), to go forward with the Impeachment Hoax. Polls have now turned very strongly against Impeachment!

The longtime congressman from California also said he wants to first speak with his constituents before going ahead with impeachment, suggesting that he’s seen several recent polls that show the independents are souring on the inquiry.

“I want to discuss this with my constituents and colleagues before I make a final judgment on this,” Schiff said.

Last week, Trump told Fox News that he wants a trial in the Senate.

“We wanna call the whistleblower. But you know who I want as the first witness, because frankly, I want a trial,” he said. “The whistleblower, in my opinion, is a political operative,” the president added in the interview.