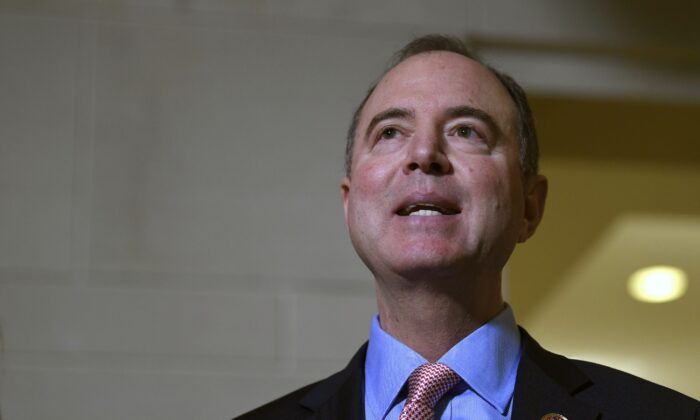 House Intelligence Chairman Adam Schiff (D-Calif.) claimed ignorance of how the FBI abused the Foreign Intelligence Surveillance Act (FISA) in surveilling a Donald Trump 2016 presidential campaign associate, despite viewing the same documents his Republican colleagues did when they said that the FBI withheld information from the FISA court.report

“Given what you know now … are you willing to admit that you were wrong in your defense of the FBI’s FISA process?” Schiff was asked on “Fox News Sunday.”

“I’m certainly willing to admit that the inspector general found serious abuses of FISA that I was unaware of,” Schiff responded. “Had I known of them, Chris, yes I would have called out the FBI at the same time.”

Department of Justice Inspector General Michael Horowitz found that the FBI made 17 “significant errors or omissions” in applying to spy on Trump campaign aide Carter Page and additional errors in following internal guidelines.

House Republicans said in a memo in February 2018 that the FBI abused the FISA process in applying to spy on Page, but Schiff released his own memo a few weeks later making claims that were shown by Horowitz’s report to be false.

“FBI and DOJ officials did not ‘abuse’ the Foreign Intelligence Surveillance Act (FISA) process, omit material information, or subvert this vital tool to spy on the Trump campaign,” Schiff wrote in his memo.

“I think it’s only fair to judge what we knew at the time, not what would be revealed two years later,” Schiff said on Sunday. “But yes, there were very serious abuses of the FISA process. They need to be corrected, we need to make sure they never happen again.”

Horowitz found that the FBI learned of exculpatory information regarding Page, including the fact that he was a CIA asset in the past, as well as damaging information about ex-British spy Christopher Steele’s anti-Trump dossier, including how a source of Steele’s was known for boasting and embellishment.

The dossier played a key role in the FBI’s successful application to spy on Page. None of the 103 damaging claims in Steele’s dossier related to Trump and his campaign have been verified and a number have been debunked.

Page said on Sunday that he wanted Schiff to apologize to him.

“Main apology I’m awaiting is from @RepAdamSchiff for the terror threats he helped inspire with his false statements on TV on March 20, 2017,” Page said in a statement on Twitter, urging Schiff to call Horowitz to testify to the House Intelligence Committee.

Main apology I’m awaiting is from @RepAdamSchiff for the terror threats he helped inspire with his false statements on TV on March 20, 2017.@HouseIntel should accept @DevinNunes‘ request and call the great @JusticeOIG to testify.https://t.co/nFoKQwEtlq

House Intelligence Ranking Member Devin Nunes (R-Calif.) wrote a scathing letter to Schiff on Sunday, telling him, “It is clear you are in need of rehabilitation.”

“Outlining every false claim from your memo would require an extremely long letter, so I will limit my summary to a few highlights,” Nunes wrote, noting that Schiff claimed the Department of Justice “made only narrow use of information from Steele’s sources” to apply to surveil Page, that the Page FISA warrant let the FBI gather “valuable intelligence,” and that the FBI conducted a “rigorous process” to vet Steele’s allegations.