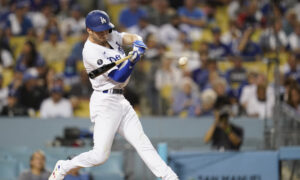 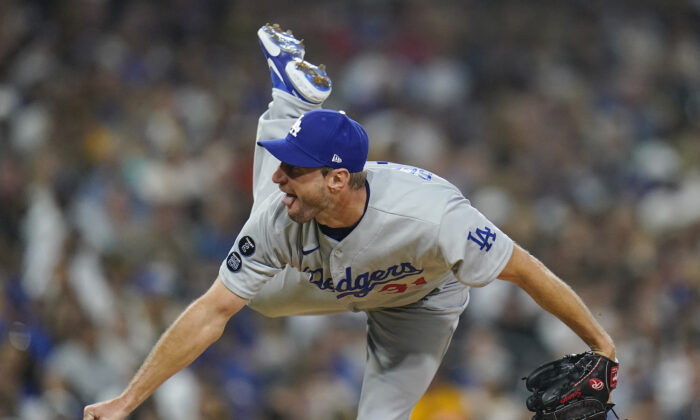 SAN DIEGO, Calif.—The Los Angeles Dodgers have been on a tear since they obtained Max Scherzer at the trade deadline.

After seeing Mad Max up close for five starts, manager Dave Roberts has a new appreciation for the 37-year-old veteran.

“He’s been huge. He’s been better than advertised,” Roberts said after Scherzer pitched 7 2/3 dominant innings to win his eighth straight decision and lead the surging Dodgers to a 4-0 win over the plunging San Diego Padres on Aug. 26 for a three-game sweep.

“I knew that there was a work ethic and a fire, but I didn’t realize the preparation,” Roberts said. “He knows exactly what he wants to do when he takes that mound. He knows where the defense is at, he knows how to navigate a lineup and knows what stuff is working that particular night. To layer that all with the talent is pretty impressive.”

Scherzer (12-4) allowed only two hits, struck out 10 and walked one for the Dodgers, who handled the listless Padres less than 24 hours after winning 5-3 in a 16-inning game that took 5 hours, 49 minutes, and ended at 12:59 a.m. It was the longest big league game since pandemic rules were implemented last year.

The Dodgers won for the 12th time in 13 games and for the 17th time in 20 games since Scherzer made his first start for them, a 7-5 home win against Houston on Aug. 4 in which he struck out 10 in seven innings. They trail the San Francisco Giants by 2 1/2 games in the NL West but enjoy an 11 1/2-game lead for the first wild-card spot.

Austin Barnes hit a two-run home run off Yu Darvish to help send the Padres to their fourth straight loss and 12th defeat in 14 games. They dropped two games behind Cincinnati for the second wild card.

Scherzer hasn’t lost since May 30 against Milwaukee, a span of 13 starts that dates to his time with Washington. He is 4-0 in five starts with the Dodgers since being acquired on July 30 along with infielder Trea Turner.

Scherzer said he got into a good rhythm with Barnes behind the plate “and was able to execute any pitch at any time. I was able to work ahead in the count and stay in sequence.”

Scherzer struck out the side in the first and retired his first seven batters before Victor Caratini doubled down the right field line. The only other hit he gave up was Trent Grisham’s double leading off the fifth, but the Dodgers got out of the inning when third baseman Justin Turner started a double play on Caratini’s grounder.

“Obviously to me the play of the game was when we were able to turn that double play,” Scherzer said. “Turner was able to catch it, throw it to (Trea) Turner and turn the double play. That really changed the complexion of the game, kept my pitch count under control and allowed me to continue to pitch deep into the game.”

Scherzer gave the bullpen a break after the Dodgers used 10 pitchers in the 16-inning game.

Scherzer struck out his final batter, Caratini, for the second out of the eighth, before getting the hook from Roberts.

“Obviously in a game like tonight we could have leaned on Max a little bit more, but I just felt where we were at, getting 23 outs, he did his job,” Roberts said. “We’ll lean on him more.”

“It was a great series,” Roberts said. “It started with Julio and what he did. They just feed off each other. Clearly, each one of those guys, from Julio to Walker to Max, set the tone for our ballclub. To come in here where we haven’t played well this year and to win three games was big.”

Scherzer, a three-time Cy Young Award winner and eight-time All-Star, improved to 1-0 in three starts against San Diego this season. He allowed 11 runs in 10 2/3 innings in his two previous starts against the Padres, both in July with Washington.

Darvish (7-8), activated from the 10-day injured list before the game, allowed four hits and five runs in six innings, struck out six and walked one.

Darvish walked Billy McKinney leading off the third and Barnes followed with a homer into the seats in left-center. Trea Turner hit a one-out double and scored on Corey Seager’s double over the head of right fielder Fernando Tatis Jr., who didn’t get a good read on the ball. Tatis has started 10 games in the outfield since he returned from his latest stint on the injured list because the Padres are trying to limit the wear and tear on his left shoulder.

AJ Pollock, who had a great series offensively and defensively, tripled leading off the fourth when his fly ball glanced off the wrist of diving center fielder Grisham. He scored on Cody Bellinger’s sacrifice fly.

Grisham robbed Pollock of a homer leading off the ninth with a leaping catch against the fence. Pollock robbed Manny Machado of a two-run homer in the series opener Tuesday night.