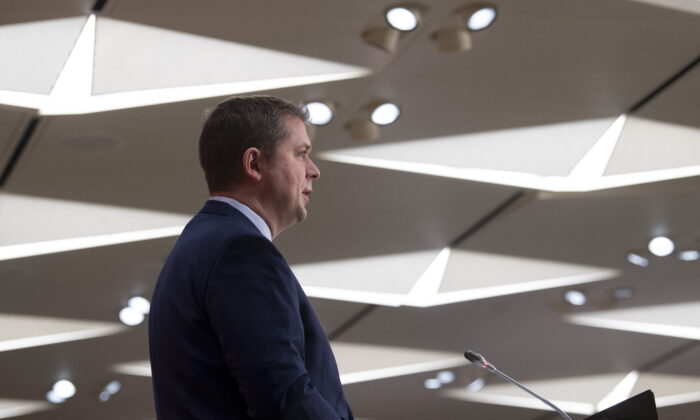 Leader of the Opposition Andrew Scheer speaks during a news conference on Parliament Hill, May 11, 2020 in Ottawa. (Adrian Wyld/The Canadian Press)
Canada

Scheer Says No Taiwan at WHO a ‘Shame’, and Says Trudeau Support Came Late

OTTAWA—Conservative Leader Andrew Scheer says it is a shame that Taiwan was not admitted to key meetings this week of the World Health Organization.

Scheer says Canada’s efforts on behalf of Taiwan, as part of an initiative led by the United States and Japan, only came in the last few weeks after loud calls by his party and polls showing support for that position.

Scheer is accusing the Trudeau Liberals of a policy of appeasement toward China, which has illegally imprisoned two Canadian men, and that he says the People’s Republic is exerting undue influence on the WHO.

China objects to Taiwan’s participation in the organization because it views the island as a breakaway province.

Canada, the United States and six major allies told the WHO that its ongoing exclusion of Taiwan has created a serious public health concern during the COVID-19 crisis.

They were not able to win access for Taiwan at the World Health Assembly meetings this week, after arguing that its early success at controlling the pandemic qualified it to participate as an observer.