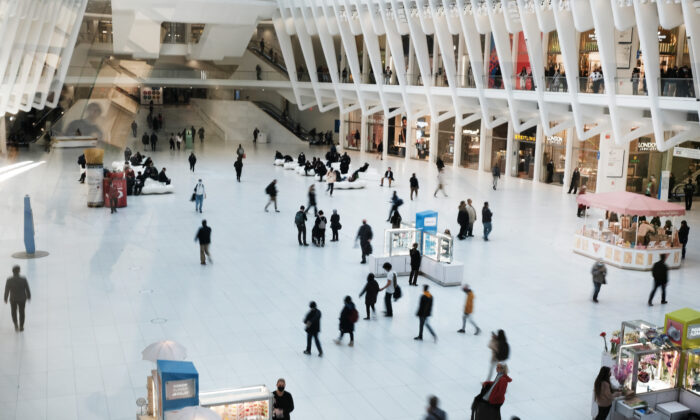 People walk through a mall in Manhattan, New York, on April 4, 2022. A recent report from the Commerce Department shows a 1.4 percent drop in the U.S. GDP for the first quarter of the year. (Spencer Platt/Getty Images)
Business Columnists

Scary Report on the US Economy

A frightening economic report has come out of the Commerce Department: U.S. real gross domestic product (GDP) fell at a 1.4 percent annual rate during the first quarter of the year. Suddenly the prospect of recession has become very real.

A slowdown in the recovery was already evident, and recession is indeed on the horizon, but the first quarter’s outright GDP decline overstates the economy’s present degree of weakness.

The first quarter’s decline constitutes quite a turn from the 6.9 percent annualized real GDP growth reported for 2021’s fourth quarter. Sudden turns of this sort often suggest that the data include distortions from particulars and less that is fundamental. In this case, three of these kinds of particulars stand out: in government spending, inventories, and foreign trade.

Government spending in the first quarter fell a sharp 5.9 percent in real terms at the federal level and 0.8 percent at the state and local levels. Alone, these declines took half a percentage point off aggregate GDP and accounted for fully one-third of the recorded overall drop.

The slide is unlikely to typify coming quarters. Indeed, the fighting in Ukraine will boost defense spending and may have already given the Pentagon appropriations recently hurried into law. Otherwise, history shows that governments tend to increase, not decrease, spending over time. State and local governments certainly have huge infusions of federal cash at their disposal.

Inventories, too, seem to be making one-time adjustments to past pressures. For much of 2021, inventories fell as supply chain shortages forced retailers and others to meet sales with what they had on hand. But in the fourth quarter, those supply problems eased enough to allow businesses to rebuild their depleted inventory stocks. Inventory building surged beyond any historical norms. By comparison, the first quarter’s return to something closer to normal looked paltry.

In the Commerce Department’s accounting, that shift back to historical norms seemed to deny the economy some $34.5 billion. A recurrence of this kind of shift seems unlikely.

Foreign trade in the first quarter had complex but not likely lasting effects. Imports were strong, indicating robust buying by Americans. Exports, however, fell sharply, no doubt because of the lockdowns in China and the troubles that lingering pandemic effects and Ukraine war sanctions are having on Europe.

Because the GDP calculation subtracts imports from exports, the net effect trimmed some 3.2 percentage points off the overall GDP figures, accounting for more than twice the overall decline in real GDP. It’s indicative of the effect that overall real final sales in the first quarter showed a 0.6 percent annual rate of decline, but sales to domestic buyers rose at a 2.6 percent rate. Problems in China and Europe may well persist and delay a recovery in U.S. exports, but the sudden shift that affected the first quarter won’t recur.

Meanwhile, much else in the GDP accounting is encouraging. American households, for example, increased their real consumer spending at a 2.7 percent annual rate, an acceleration over the 2.5 percent rate of 2021’s fourth quarter and the 2.0 rate of the third quarter. Still more encouraging is how businesses have increased their capital spending on productive facilities, equipment, and technologies. These rose at a 9.2 percent annual rate in the first quarter, far faster than the 2.9 percent of 2021’s fourth quarter and certainly the 1.7 percent rate of the summer quarter. This kind of spending expands the economy’s overall productive abilities and paves the way for job growth.

If this shocker of a report still doesn’t say recession, the country’s undeniable inflation problem makes clear that one is nonetheless on the horizon. It will arrive either because the Federal Reserve’s anti-inflation policies precipitate recession as they frequently have in the past, or the inflation itself causes enough economic distortions to bring on recession regardless of what the Fed does.