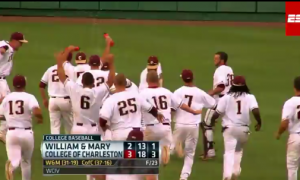 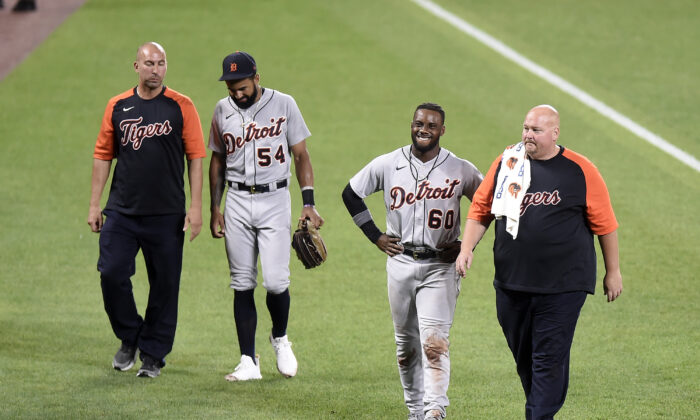 Derek Hill #54 and Akil Baddoo #60 of the Detroit Tigers come out of the game after colliding with each other in the eighth inning against the Baltimore Orioles at Oriole Park at Camden Yards in Baltimore, Md., on Aug. 10, 2021. (Greg Fiume/Getty Images)
Sports

By Chris McCosky
From The Detroit News

BALTIMORE—The game all of a sudden became very secondary as Tigers left fielder Akil Baddoo and center fielder Derek Hill were sprawled out on the ground in left field after a fierce collision in the eighth inning Tuesday night.

The two speedy rookie outfielders were chasing a drive in the gap hit by Orioles slugger Anthony Santander. They collided at near full speed and somehow Hill held on to the ball. The collision seemed more body to body but Baddoo was clearly dazed and wobbly.

Both walked off under their own power and there was no immediate word on their condition.

The Tigers had to scramble their defense, inserting Harold Castro into the game at shortstop and moving Niko Goodrum from shortstop to center. Grayson Greiner was inserted at catcher, moving Eric Haase out to left.

All this, plus a nearly two-hour (1:54) rain delay at the start, and the Tigers walked out with a 9–4 win over the Baltimore Orioles at Oriole Park at Camden Yards.

They put themselves in position to win by refusing to let a couple of early innings die. Five of the six runs they scored over the second and third innings were generated by two-out hits.

Lefty Keegan Akin, the Western Michigan University product, started for the Orioles and dispatched the first five batters he faced, striking out Jeimer Candelario (looking) and Haase (chasing) to start the second.

But he walked Goodrum and he never really recovered. Willi Castro scorched an opposite-field double off the right-field wall to score Goodrum. Baddoo followed with a two-strike triple, also to the opposite field.
It was Baddoo’s second extra-base hit off a left-hander this season.

Jonathan Schoop doubled home Robbie Grossman from first base in the second. Then, again with two outs, Goodrum singled in a run and Castro tripled home two more.

Goodrum, activated off the injured list and playing for the first time since July 10, had two walks, a single, drove in a run, and scored twice.

It was the third time this season the Tigers scored six runs in the first three innings and they won the first two. So you expected it to be more than enough support for Casey Mize. It was just enough.

Mize got bit by the long ball for the second straight start and he didn’t get through five innings. He gave up three home runs to the Red Sox in his last start, and he did it again Tuesday against the Orioles.

Santander led off the second and third innings with home runs. He hit a slider in the second inning onto Eutaw Street, which runs beyond the right-field concourse. In the fourth, he hit a 91-mph two-seamer into the seats in left field.

Two batters later in the fourth, D.J. Stewart unloaded on a 93-mph four-seamer and hit it out to right field.

Santander and Stewart were two of just three lefties in the Orioles lineup against Mize, and they did damage.

The third lefty tagged Mize, too. Cedric Mullins doubled with one out in the fifth and went to third on a wild pitch. Mize induced a comebacker from Ramon Urias. He looked Mullins back to third but threw errantly to first, which allowed Mullins to score.

It was Mize’s first career error.

The Tigers resumed scoring after a three-inning lull. Candelario hit his eighth home run of the season, a two-run shot in the top of the eighth. Greiner doubled and scored on single by Grossman in the ninth.