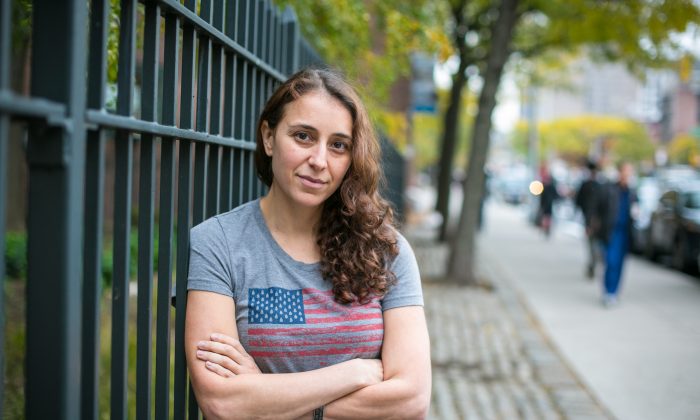 Scars on the Inside: Unpacking Trauma After 10 Years in the Military

NEW YORK—”There are days that I haven’t talked to anyone about. I know it’s spinning around in there, and I know the words, but I can’t put a voice to it. It’s almost like my body won’t let me. And it’s a really weird feeling.”

It took Elana Duffy two years after leaving the military to even think about getting help. Her traumatic brain injury and post-traumatic stress disorder (PTSD) were taking a toll on her life. She was often angry, either suddenly shouting at people or totally apathetic, and she couldn’t hold down a job.

But she didn’t trust doctors and had lost hope that the system would help her.

“Because we’re military, we have to adapt, and we have to push through it—we have no idea how much we have in there to process,” she said.

Duffy was a counterintelligence and interrogation specialist in the U.S. Army, with deployments to Afghanistan and Iraq.

“I kept avoiding treatment because [I thought], ‘I had adapted before, why can’t I adapt now?'” she said.

Duffy’s recovery is made more challenging by a brain injury she sustained in Iraq in 2005, when a roadside bomb exploded near her Humvee.

The shock wave from the bomb hit her right in the face and whipped her head back against a metal plate. Although she was wearing a helmet, the impact knocked her out and caused both her ears to bleed. But she told everyone she was fine and the convoy continued.

“That was a rough day—which I only know because I was able to read the reports later,” she said. Once the convoy arrived at the destination, her partner asked her if she was ready for the meeting, and she thought, “I don’t know what we’re doing here. Where are we?” recalled Duffy.

She was reading everyone’s name tags off their shirts because she had no recollection of who they were. “I thought I was having a massive stress reaction, I had no idea what was happening. I had just been knocked out and I thought I must be stressing out.”

Two or three days after the bomb incident, Duffy was sent to the combat mental health unit—”a little kiosk somewhere”—for a checkup.

“You take an interrogator [like me] to combat mental health and I know exactly what to say to these guys to get me back on the road,” she said. “I’m not getting sent home for being stressed out.”

She was cleared for duty and developed compensation skills for her memory—mostly using Post-It notes.

After she got home from Iraq, her symptoms worsened, her headaches intensified, and her sight was affected.

“I graduated early from college and now I can’t remember what happened yesterday or what a person’s name is,” she said. “When I was 14 years old, I was seventh in the state on balance beam and now I can’t walk in a straight line.”

For two years, to Duffy’s growing frustration, doctors told her nothing was wrong with her physically, so she stopped reporting her symptoms out of concern they were psychological and she would lose her job. Meanwhile, she was assigned to run a counterintelligence and counterterrorism field office in Germany.

Finally, in 2008, while in Germany, she reported her symptoms to a trusted physician’s assistant and was referred for an MRI scan.

“When the neurologist called with the results of the MRI, it was actually a relief because it was the first time I didn’t feel like I was going crazy in two and a half years,” Duffy said. “Someone actually believed me, and I had a real reason for everything that was going wrong.”

She also discovered that a microadenoma (a small, harmless tumor) by her pituitary gland had likely saved her life. The impact of the blast and her head hitting the metal plate caused a blood surge that could have ruptured and triggered an aneurysm had it not bled instead into the adenoma, which absorbed all the extra blood.

She was sent to the Walter Reed National Military Medical Center in Maryland immediately for neurosurgery—then spent four months recovering.

Back in Germany, a deployment slot opened up and she volunteered for it, but was never sent.

Duffy relocated to a classified unit in Hawaii and volunteered for a six-month deployment to Afghanistan.

“If I’m going to be in the army, send me on a deployment,” she said. “This is where I feel like I’m making the most difference.”

The medical memorandum she needed to clear her for deployment instead shattered her dreams of going to Warrant Officer Candidate School and being promoted—having a full military career.

“The doctor said not only would I never deploy again, but I’d also never be promoted,” Duffy said.

After a year and a half of intensive physical and cognitive therapy in Maryland while the army deliberated on her medical status, she decided to retire from service in December 2012.

It had been a decade since Duffy was in Iraq when terrorists struck France in November 2015 in a string of coordinated attacks that killed 130 and injured 386.

The ISIS terrorist group claimed responsibility, but Duffy was convinced it was her fault and told her boyfriend as much. He told her she wasn’t even in France, but she wouldn’t let it go.

“No, because this is ISIS and I was chasing some of those guys and then they went to Syria,” she told him.

By that point, Duffy was already getting treatment for PTSD through the Headstrong Project, a nonprofit that provides free treatment to post-9/11 veterans with PTSD. But she had a severe depressive episode after the France bombings and still hasn’t fully processed it.

“I can talk about it, but I’m so tense talking about it because I still shoulder a lot of it, because I still haven’t come to a final conclusion on that one. You know, if I had done X, Y, and Z, things would have been different,” she said. “So the little bit of processing that we’ve done already has got me to the point where I’m not lying in bed every time ISIS’s name gets mentioned.”

She said the key is not that the therapist convinces her it’s not her fault, but rather “the entire purpose of therapy is to make you come to your conclusions so you actually believe them.”

Headstrong tailors a program depending on the veteran’s needs. Duffy does a psychotherapy treatment method called EMDR (Eye Movement Desensitization and Reprocessing). She holds a small pod in each hand that alternately vibrates as she silently recalls a traumatic event. The vibrations force the brain to rapidly process the memory and dampen the emotional power of it. EMDR therapy also trains the brain to forge new associations with traumatic events and reduce triggers that can cause the trauma to resurface.

Duffy has nothing but praise for Headstrong and wishes they had enough funding to help everyone who needs it. She said the military should assign every single service person a therapist right from the start and require that they see their therapist every single week, no matter what.

Duffy is constantly thinking of others and it’s clear in the direction she chose. Last year, she launched Pathfinder.vet, a review site that is like a Yelp for veteran services.

She is also studying for her MBA at Baruch College’s Zicklin School of Business.

“What’s important to me is getting back to where I was. Getting back to the person I was, but also accepting the pieces that have irrevocably changed,” she said.

Two of the common psychological burdens veterans deal with are survivor’s guilt and moral injury. Soldiers suffer moral injury when they commit or witness an act that goes against their moral code and subsequently produces a profound sense of guilt or shame.

Duffy wears a stainless steel bracelet inscribed with the name Sgt. Deyson Cariaga, a soldier from Hawaii who was training under her in Iraq.

On July 8, 2005, Duffy was scheduled to appear in front of the promotions board at the base, so the rest of her team also stayed back. But, replacing her, Cariaga went on a raid and drove the Humvee that Duffy usually drove. He was fourth in the convoy.

A roadside bomb with white phosphorus went off right under the driver’s seat and Cariaga was killed instantly. He was 20. The other passengers were injured.

Once, on a raid, Duffy walked into a house and was told the man they were looking for was in Baghdad. They had been told that every time they’d tried to find him.

This time, she stopped one of the children, a boy about 5 years old, and said, “Hey buddy, so your dad’s not home?”

The boy said his father was at the neighbor’s house. She asked him to go with the infantry guys to fetch his father.

The child brought his dad back—and that may have been the last time they saw each other. “His father was building bombs in the backyard … and those were killing friends of mine,” Duffy said.

The Mission Continues
Helps veterans who are adjusting to life at home through community impact
314-588-8805
MissionContinues.org

Team Red, White, and Blue
Connects veterans to their community through physical and social activity
TeamRWB.org