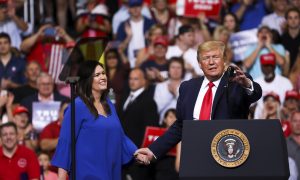 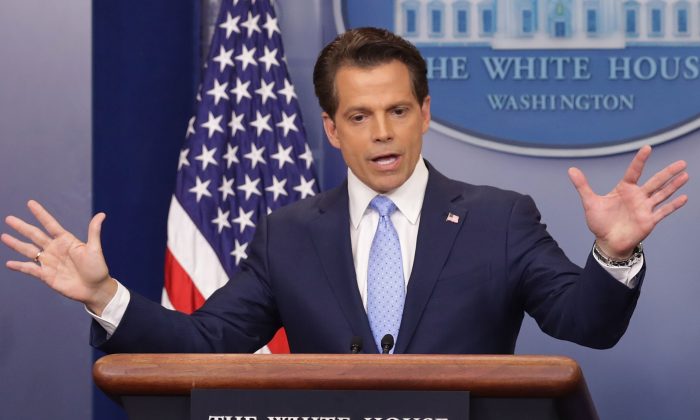 Scaramucci, who Trump called a “highly unstable ‘nut job'” and fired from his administration role after just 11 days on the job, claims he could potentially flip as much as 8 percent of the president’s voters and snatch the 2020 election.

During an interview on the “Hacks on Tap” podcast on Aug. 20, Scaramucci mentioned that he was going to be “running advertisements” from a political action committee that he hasn’t yet formed, adding, “but I will.”

Scaramucci, who goes by the nickname “Mooch,” is “back in the president’s crosshairs after voicing his opposition to him,” wrote podcast host David Axelrod, adding that in the episode—headlined “Mooch Ado About Something”—the former communications director “fills us in on his plan to ‘beat the bully.'”

“I’m in the process of doing it,” Scaramucci told Axelrod in the interview. “It’s going to be The Committee to Dismantle Trump, but I’ll come up with a much more clever thing than that. I’m gonna throw in my own dough, ask others to put their dough in there and we’re going to explain to the people what he’s doing.”

He said he expects to reach a portion of Trump’s supporters that may be small but not insignificant.

“At the end of the day, you know, I can grab ahold of 5, 6, 8 percent of the people that know he’s nuts and possibly move them,” Scaramucci said.

Scaramucci has shifted from being a Trump insider and defender—even after leaving the White House—to becoming one of the president’s most vocal detractors.

Writing on Twitter, he called his past support of Trump a “mistake” and vowed to fight his 2020 reelection, saying, “I will do what it takes to help make things right.”

Trump fired back at Scaramucci, saying he was “totally incapable” of the job and that his time in the White House amounted to “11 days of gross incompetence.”

Anthony Scaramucci is a highly unstable “nut job” who was with other candidates in the primary who got shellacked, & then unfortunately wheedled his way into my campaign. I barely knew him until his 11 days of gross incompetence-made a fool of himself, bad on TV. Abused staff,…

Scaramucci on the Offensive

Scaramucci’s appearance on Axelrod’s podcast follows other interviews with the media. In one of these, he claimed that Trump would drop out of the 2020 election.

Scaramucci also said he was assembling a coalition of ex-Cabinet officials who worked for Trump to run against him before the 2020 election.

He told CNN: “I’m in the process of putting together a team of people that feel the exact same way that I do. This is not a ‘Never Trump’ situation. This not just screeching rhetoric. This is—OK, the guy is unstable. Everyone inside knows it, everyone outside knows it. Let’s see if we can find a viable alternative,” said Scaramucci. “Moreover, I have to get some former Cabinet officials in unity to speak up about it. They know it’s a crisis.”

He didn’t name anyone associated with his coalition but said that by “middle to late fall” there will be a “trove” of people that will speak out against the president.

Former White House Director of Strategic Communications Mercedes Schlapp recently echoed Trump’s criticism of Scaramucci, calling him a self-centered individual who abused staff during his 11 days with the administration.

Trump said on Twitter that while serving with his administration, Scaramucci “made a fool of himself, bad on TV. Abused staff, got fired.”

“He was a mental wreck,” Trump added. “We didn’t want him around.”