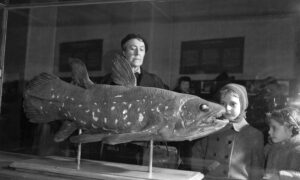 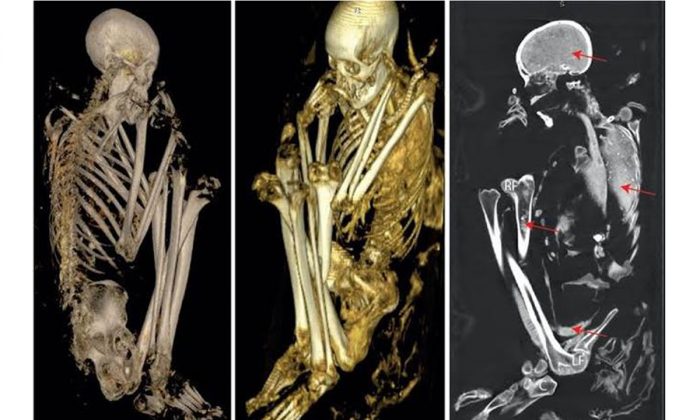 The intact mummy, covered with animal skin, as it was discovered at the base of a cliff in Botswana. (SA Journal of Science)
archaeology

He lay alone in a shallow grave at the base of a cliff for hundreds of years. Then, in 2008, patrol staff at a game lodge stumbled across the man’s remains—and he became the first mummy ever found in Botswana. Now a team of scientists from Botswana, South Africa and Switzerland has used computerized tomography (CT) scanning and ancient DNA analysis to uncover some of the Tuli mummy’s secrets. The Conversation Africa’s science and technology editor Natasha Joseph asked two of the study’s authors, Maryna Steyn and Frank Rühli, to explain what they found.

Q: The Tuli mummy is one of a kind, so mummification obviously wasn’t a common practice in Botswana. Was it common elsewhere in southern Africa?

A: Mummification was not common in southern Africa, but it did happen. This is the first mummy found in Botswana. A few have been found in neighboring South Africa, like the 2000 year old Kouga mummy.

Ethnographic literature, particularly focusing on Zimbabwe, suggests that after a leader died, his body was not immediately interred but may have been treated by usually slowly drying it over a low fire. This may have assisted in the preservation of such a body. The body would then be wrapped in a cloth or bull hide and buried at the same time that the leader’s successor came to power.

Q: How does one perform a CT scan on a mummy? It must be quite risky, given the fragile condition of the remains. Is it a common procedure elsewhere in the world where mummies are found more frequently?

A: Modern imaging techniques have opened up a whole new world when it comes to mummy studies. CT scans are frequently used, though it can be a risky process—the mummy can be damaged during transportation and scanning. The scientists involved usually wrap the mummy and wear gloves as much as possible so that the mummy isn’t physically damaged.

Also, as these mummies are not in the same position a living patient would be—supine, straight or on their back—it is sometimes difficult to fit them into the scanner. The Tuli mummy, for instance, was found curled up into a fetal position. These unusual body positions sometimes make it difficult to interpret the scans’ findings.

But CT scans give us the chance to get really important medical and archaeological information through non-invasive examinations.

Q: What did the CT scans and DNA analysis tell you about the Tuli mummy? Who was he?

A: In the initial study his age was estimated to be between 40 and 55, but the new information from our scans suggests that the Tuli mummy was definitely older than 50. He lived during the Iron Age or, more specifically, the Late Iron Age, and suffered from degenerative disease, especially of the spine. We could tell this because of the osteophytes along his spine. These are bony projections that suggest degeneration of the joints.

The scans didn’t reveal any preserved organs, which means they either degenerated after death or were removed before burial. The second is unlikely, since it would be unusual practice in the area.

We also did aDNA analysis, which stands for ancient DNA. It is old, and therefore difficult to extract. One has to do this in a specialized aDNA laboratory. One of the co-authors on our paper in the SA Journal of Science was Molebogeng Bodiba, who traveled to Switzerland to work in a dedicated aDNA lab.

The Tuli mummy marks the first time that ancient DNA has been extracted from a southern African mummy. Generally speaking, this helps scientists to get a better understanding of things like local population genetics.

His aDNA revealed that Tuli was related to modern day Sotho-Tswana and Khoesan people. This is what we would have expected, but it’s great to have it confirmed and to see that the technology works.