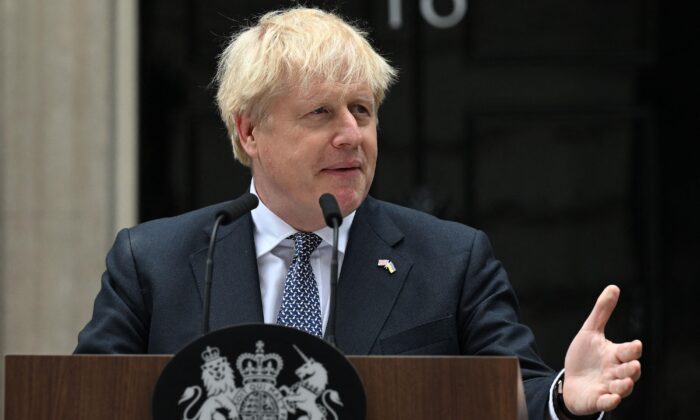 UK Prime Minister Boris Johnson addresses the nation as he announces his resignation outside 10 Downing Street in London on July 7, 2022. (Justin Tallis/AFP via Getty Images)
Viewpoints

UK prime minister resigns in scandal, helped by the left-wing UK media, self-serving conservatives, and himself

As I’m writing from the United Kingdom for the next couple of weeks, I thought I would offer a take on Boris Johnson’s resignation that involves one huge missed opportunity and one indefensible decision.

On the one hand, we’ll touch on how he fed the left-wing British media a juicy scandal via his own self-inflicted stupidity. On the other, we’ll discuss how Johnson missed a key economic opportunity to enhance post-Brexit British trade.

These two events are likely what will define his time in office.

Groping for an Answer

The scandal that led to Johnson stepping down was his appointment of Member of Parliament Chris Pincher as deputy chief whip in February, despite his supposed prior knowledge of Pincher’s long history of allegedly groping other men.

In the past few days, speculation had run high about what Johnson knew about Pincher and when he knew it. That story continues to evolve, but it looks as though Pincher’s history was well-known to many.

The notion that Johnson didn’t know about Pincher’s history just isn’t credible. So why would the prime minister make such an appointment?

It may have been as simple as returning a political favor. But whatever it was, it wasn’t smart. Johnson’s subsequent resignation is a sad ending to his tenure as prime minister that could have been so much more.

Riding the Brexit Wave to Power

Recall that Johnson was swept back into power in 2019 with the largest victory since Margaret Thatcher’s in 1987. Johnson had a serious mandate to get the Brexit done and over with.

Brexit was a safe and powerful opportunity for Johnson. It was the will of the British people to leave the European Union. Johnson capitalized on Conservative Prime Minister Theresa May’s failure to achieve Brexit to return to power, pledging to get it done.

Boris delivered on the promise—at least in the first half.

There’s no question that Johnson did, in fact, get the UK out of the European Union. But it’s one thing to leave one trading relationship and quit another to replace it with a new one. On that score, Johnson was unable–or unwilling–to put in a trade agreement to replace the one Britain had just exited.

The best option at the time was to negotiate an extensive free trade agreement with the United States. Johnson had a narrow but definite window of opportunity to do so with then-President Donald Trump but failed to capitalize on it.

It was actually quite a good opportunity to replace the EU trade deal with a more favorable one with the United States. The Trump administration was certainly in favor of making a bilateral trade deal with the UK.

In fact, it would have benefitted both sides.

Recall that at that time, the Trump administration was fully engaged in decoupling U.S. trade with China on a number of fronts.

Tariffs against hundreds of billions of Chinese products were implemented, which was a huge policy shift. The United States was also pressuring European and other allies to boycott Huawei, the Chinese networking and phone equipment manufacturing giant that was a source of data theft for Beijing.

On a broader basis, U.S. and Western manufacturing companies had begun reshoring and near-shoring their operations in response to rising Chinese labor costs, data theft, shipping expenses, and other negative factors.

In short, the United States was certainly in the mood to cut new trade deals.

The vision of the Trump administration at the time was to establish a renewed and strengthened partnership with the UK and Europe at the expense of Chinese power and influence. The Johnson administration could have capped its successful Brexit effort with a free trade agreement for Britain with the world’s largest economy.

A Multi-Phase Trade Agreement Wasn’t Out of the Question

What did Johnson do?

He let the free trade negotiations slip away.

Not all at once, but over 10 months or so before the 2020 elections in the United States. Of course, a full and comprehensive trade agreement between the United States and the UK may not have been possible to complete in such a short time frame—but a multiphased agreement could have been created.

Such an agreement could have allowed some basic points of common interest to be codified, with an agreed-upon schedule for further phases of negotiations for more sensitive and complex areas in the future.

Such a multistep framework would have been similar to what the Trump administration had put in place with China.

But with a free trade agreement, he could at least have secured some trade advantages that may have served the UK well in these difficult economic times.

Britain May Have Been in a Better Position Than Today

It could be argued, after all, that Johnson would have been in a stronger trading position with the United States than it had been with the European Union for the simple reason that bilateral trading can be more flexible and beneficial than multilateral trading, wherein multiple national interests have to be considered.

But due to his failure to secure a bilateral trade agreement with the United States when it had the chance, the UK is still without one today.

Moreover, the Biden administration is in no hurry to make one.

The greatest success of Johnson’s leadership was delivering on his promise to complete the Brexit plan as voted upon by the British people.

But when it came to delivering any post-Brexit trade agreement of much merit—particularly when he had the chance to deliver a huge one with the United States—he failed to seize the opportunity when it was before him, whether that involved putting more effort in negotiations or becoming more flexible in some areas.

Sadly, scandal seems to be a part of all administrations to one degree or another. In his case, Johnson’s last act as prime minister is one of scandal as well, resigning in a less-than-honorable fashion.

Would a trade deal with the United States have solved all of Britain’s economic challenges?

Of course not, but it could have been quite useful.

Did Johnson know about Pincher’s background before appointing him to his lofty position?

If he did, as it seems apparent, then the scorn he is now receiving is well-earned.