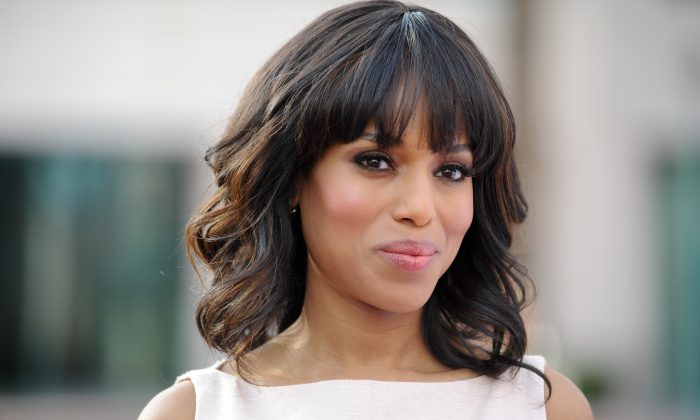 Actress Kerry Washington at the Academy of Television Art and Sciences' event in North Hollywood, Calif. Washington married professional football player Nnamdi Asomugha last week in Idaho. E! was the first to report the nuptials Wednesday, July 3, and posted a copy of the couple’s marriage license online. The 36-year-old actress and 31-year-old athlete were married on June 24 in Hailey, Idaho. (Photo by Richard Shotwell/Invision/AP)
Entertainment

The creator of “Scandal,” the hit ABC drama, teased the script title for the Season 4 premiere, which comes in two months. The news comes as actress Kerry Washington, who plays Olivia Pope, was seen on the set o the show after having a baby.

The script is titled: “Randy, Red, Superfreak and Julia” with no other context.

It was written by creator Sondra Rhimes, who tweeted the image of the script out, and directted by Tom Verica.

There’s speculation that the title refers to main character Olivia Pope’s subordinates, with Quinn being “Randy,” Huck being the “Superfreak” one, and Abby being “Red,” according to TV Line.

It was then speculated that new cast member Portia de Rossi is “Julia.”

Last week, EW.com reported that De Rossi, a star in “Arrested Development,” would be cast in a multiple-episode story arc. It was first leaked by Ellen DeGeneres, who wrote: “So annoying when people brag on twitter & that’s why I’m not tweeting that Portia just signed on to do a top secret arc on ‘Scandal’. Oops.”

Rhimes gave an interview earlier this month about the fate of Harrison, played by Columbus Short–who left the show.

“It will be very devastating for Abby in a surprising way. You’ll see how she’s coping with it in a very different way than you would expect,” Rhimes elaborated.

“One of the things that we did specifically when we created the show is slowly deploy people’s stories. It was purposeful. Season 4 is Abby’s season. That was by design. A lot of what we know about Abby happens this season. A lot of what we discover about her and see about her back story will happen as we tell Abby’s story,” Rhimes also told TV Guide in another interview.