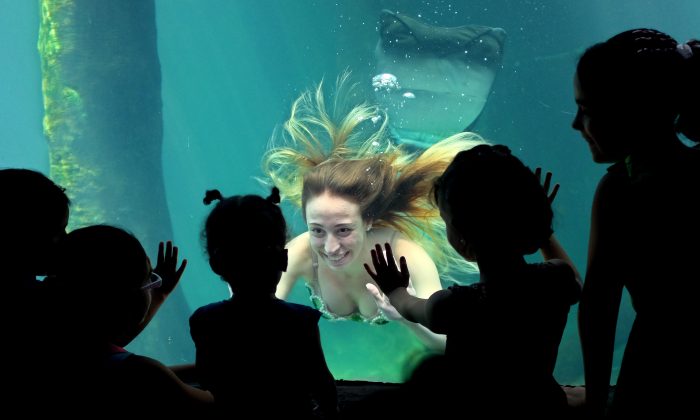 JAN 9: A model performs dressed as a mermaid at the Sao Paulo's aquarium in Sao Paulo, Brazil, Wednesday, Jan. 8, 2014. The presentation runs daily as a special event to attract visitors during the January school vacations.(AP Photo/Andre Penner)
Social Media

The post actually shows a prop from the 2011 movie “Pirates of the Caribbean: On Stranger Tides.” It was created by Joel Harlow, a special effects artist.

There’s no video of the mermaid.

When one clicks on the post, they’re taken to a page that asks one to share it first. After that, they are directed to a site that just has surveys, which are how the scammers make their money.

“Yet another viral video is making the rounds purporting to show the body of a ‘real mermaid’ washed up on a beach somewhere (some versions claim it was in India), but this latest of many attempts to convince the gullible that mermaids exist is no more credible than previous examples we’ve seen. In reality, the video consists of a montage of still photos of a prop mermaid created by makeup and special effects artist Joel Harlow for the 2011 film Pirates of the Caribbean: On Stranger Tides. They don’t come any faker than that,” says About.com writer David Emery on the mermaid hoax.

There’s been a few different posts about mermaids going around, with one being found in India and another in Mexico. They use the same “Pirates of the Caribbean” picture.