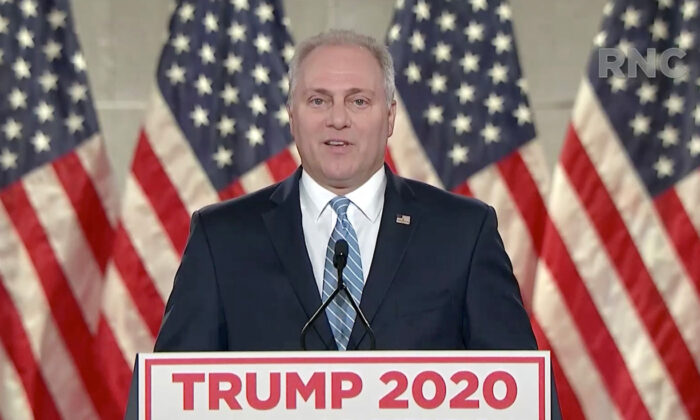 Scalise Denounces Pelosi After She Called Trump, Allies ‘Enemies’ of US

House Minority Whip Steve Scalise (R-La.) denounced House Speaker Nancy Pelosi (D-Calif.) after she referred to President Donald Trump and his “allies” as “domestic enemies” of the United States during an interview Monday.

During a Monday appearance on “MSNBC Live,” Pelosi launched an attack against the president and GOP lawmakers over their opposition to universal mail-in voting.

“We take an oath to protect and defend the Constitution from all enemies, foreign and domestic, and sadly, the domestic enemies to our voting system and our honor and our Constitution are right at 1600 Pennsylvania Avenue with their allies in the Congress of the United States,” Pelosi told anchor Ayman Mohyeldin.

Pelosi continued to urge Democrats to “mobilize,” “organize,” and not allow the president to “deter anybody from voting.”

“They’re doing everything they can [to] suppress the vote with their actions, scare people, intimidate by saying law enforcement will be there, diminish the role of the postal system in all of this.”

I was shot because of this kind of unhinged rhetoric.

Scalise in response denounced Pelosi’s rhetoric as “disgusting” in a statement on Twitter.

“Disgusting: Nancy Pelosi just called Republicans ‘domestic enemies.’ I was shot because of this kind of unhinged rhetoric. Where’s the media outrage?” he wrote.

Scalise was shot on June 14, 2017 during a congressional baseball practice in Alexandria, Virginia, by James Hodgkinson, a 66-year-old from Belleville, Illinois. Hodgkinson targeted Republican congressmen with rifle fire, wounding Scalise and four others (two Capitol Police officers and two congressional staffers). Scalise underwent three surgeries as a result of the attack.

Rep. Rodney Davis (R-Ill.), who was with Scalise at the time of the shooting, called on Pelosi to apologize for her remarks.

“I was w/ @SteveScalise and others when a deranged, GOP-hating gunman opened fire on us. This rhetoric hurts our country. We may disagree on policy, but I would never call Dem colleagues in Congress enemies of the state. Speaker Pelosi should apologize for her dangerous rhetoric,” Davis said on Twitter Monday.

“I served on the mission to capture Saddam Hussein. @SpeakerPelosi, I know what an enemy of the state is. Do you?” tweeted Rep. Mark Green (R-Tenn.).

“Be better than this, @SpeakerPelosi,” he tweeted. “To call GOP members domestic enemies to ‘honoring our Constitution’ is just wrong. @SteveScalise is correct. There should be media outrage. I would never call my Dem colleagues & friends domestic enemies.”

The president’s stance on on the security of mail-in ballots has also been echoed by Attorney General William Barr, who said earlier this year that elections conducted predominately through vote-by-mail could open up “many occasions for fraud … that cannot be policed.”

Democrats argue that mail-in voting options are necessary in order for voters to comply with public health recommendations to reduce gatherings due to the pandemic.

Experts are split on the issue. Supporters of mail-in voting say that the phenomenon is so rare that it is not an issue, while opponents say voter fraud isn’t just real, but a bipartisan issue.