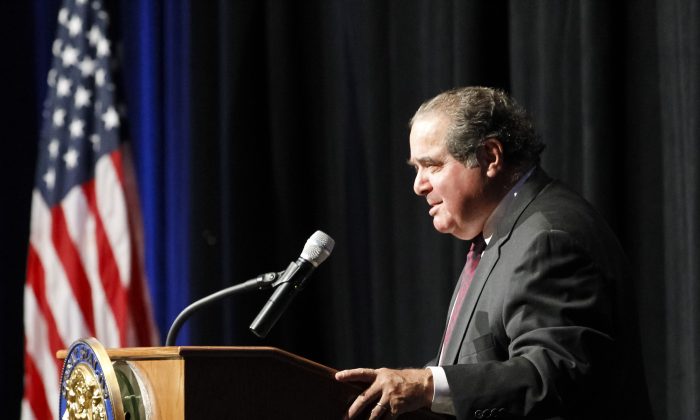 U.S. Supreme Court Justice Antonin Scalia gives the keynote speech at the Snake River Adjudication celebration dinner at the Boise Center on the Grove in Boise, Idaho, on Aug. 25, 2014. (AP Photo/Otto Kitsinger)
US

WASHINGTON—Justice Antonin Scalia’s death immediately sparked a new and heated election-year fight over whether President Barack Obama should fill the high court vacancy, with Republicans on Capitol Hill and on the campaign trail arguing the nomination should fall to the next president.

“The American people? should have a voice in the selection of their next Supreme Court justice,” Senate Majority Leader Mitch McConnell said. “Therefore, this vacancy should not be filled until we have a new president.”

His position was echoed by a pair of senators seeking the GOP presidential nomination: Ted Cruz and Marco Rubio.

Justice Scalia was an American hero. We owe it to him, & the Nation, for the Senate to ensure that the next President names his replacement.

Jeanette & I mourn the loss of Justice Scalia, and our thoughts & prayers are with his wife Maureen & his family. pic.twitter.com/e03KRZRM6q

Democrats were outraged. Sen. Harry Reid of Nevada, the chamber’s top Democrat said Obama should send the Senate a nominee “right away.”

He noted that the court is considering a number of major issues and said, “It would be unprecedented in recent history for the Supreme Court to go a year with a vacant seat.”

The President can and should send the Senate a nominee right away. The Senate has a responsibility to fill vacancies as soon as possible.

Would be unprecedented in recent history for SCOTUS to go year with vacancy. And shameful abdication of our constitutional responsibility.

Obama was traveling in California. The White House issued a statement offering condolences toScalia’s family but did not provide any details about whether Obama planned to nominate a replacement.

Before Scalia’s death, the court was ideologically split with many 5-4 decisions. The remaining justices are generally divided among four conservative votes and four liberal votes—leaving the next nominee crucial to the court’s direction, potentially for years to come.

When there is a 4-4 tie, a distinct possibility this spring, the result is basically to affirm the lower court decision before the case came to the Supreme Court. On a major issue, the high court would be likely to rehear the case once it had its full membership.