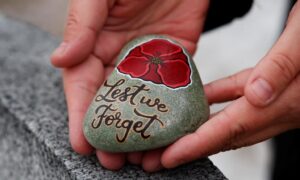 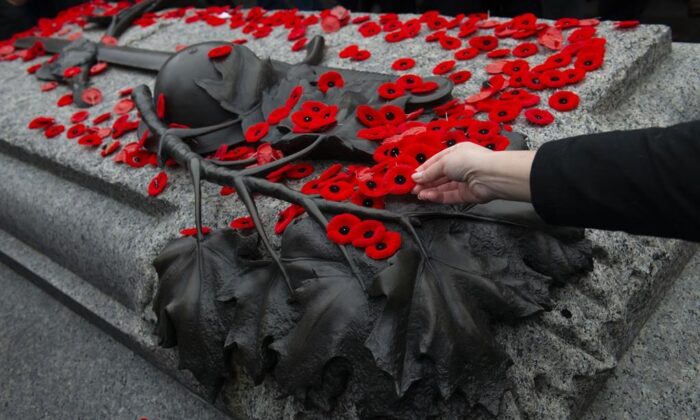 A poppy is placed on the Tomb of The Unknown Soldier following a Remembrance Day ceremony at the National War Memorial in Ottawa on Nov. 11, 2019. (THE CANADIAN PRESS/Sean Kilpatrick)
Canada

OTTAWA—Canadians are being encouraged to stay home this morning while they mark the service and sacrifice of those who have given their lives to defend the country.

The solemnity of Remembrance Day is butting up against the threat posed by COVID−19.

The Royal Canadian Legion is explicitly discouraging Canadians from attending Remembrance Day ceremonies in person this year and instead asking people to watch on TV or online.

The legion is promising to include many of the traditional elements of the ceremonies, such as the playing of the Last Post, the singing of In Flanders Fields, and flybys of military aircraft.

There will also be a special emphasis on the 75th anniversary of the end of the Second World War after many commemorations planned for earlier this year in Europe and elsewhere were cancelled because of the pandemic.

But most observances of Canada’s wartime sacrifices are expected to be extremely small, including in Ottawa, where the legion is planning to have only 100 people in place of the 30,000 who normally turn out for the national ceremony.

Many other legion branches across the country have also prepared stripped−down ceremonies, with parades by veterans and serving military personnel cancelled and wreaths laid before the events.

Private ceremonies are also being planned by long−term care facilities that are home to some of Canada’s oldest surviving veterans, many of whom might normally attend a local commemoration but who are at particularly high risk due to COVID−19.

“Even though we can’t gather as we usually do, we can always show our support for our veterans by wearing a poppy and watching the ceremonies online on Remembrance Day,” he said in French.

“Thinking of Remembrance Day, let’s pay homage to our veterans who have given us so much and to those who continue to serve today.”

“Reflection, remembrance, and respect—these are not actions that can only happen during parades or at cenotaphs. They are emotional acts we will uphold during a year when Canadians have dedicated themselves to adapting and persevering through these challenging times,” he said.