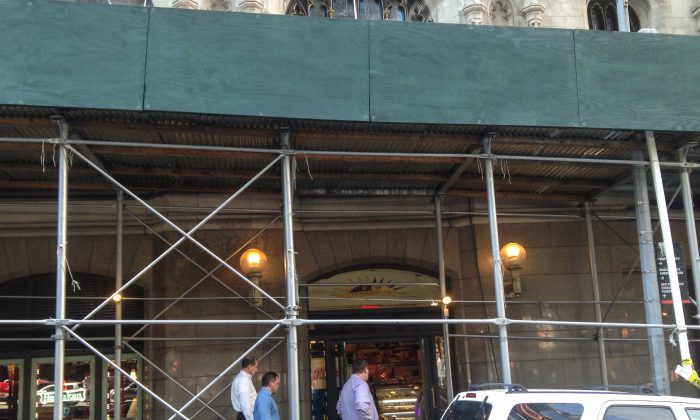 Scaffolding a Curse for Many Retail Stores

For small businesses, it can be downright treacherous.

Already operating on tiny profit margins, a business obscured by one of the city’s 7,700 sidewalk sheds, commonly known as scaffolding, is likely to lose customers.

The scaffolding covering Panini & Co. in the Financial District has been up for around six months and the owner said business has dropped by around 60 percent.

Sometimes the construction workers need to use water, which ends up splashing down through the shed cover outside his entrance, making access even more tricky. He doesn’t know how long the scaffolding will be up.

Tzortzatos has owned the store for 12 years and has another three years on his lease. He said he pays $27,000 a month for rent.

A fashion store nearby has dealt with scaffolding obstructing its business for two years. An employee said it definitely affects traffic. “People don’t see us,” he said.

Becoming invisible is the main issue small-business owners complain about when sidewalk sheds go up. It is dark underneath, the signage is usually inadequate, and there’s nothing they can do about it.

Fifteen Years on From 9/11, We Calculated the True Cost to Business

A French wine bar on the Upper West Side has been open for three years, but scaffolding has obscured the business for two years and impacted clientele hugely, according to an employee. She said even now, locals are only just noticing the bar and asking if they’ve recently opened because it’s so dark under the shed.

“No one likes sidewalk sheds—but they are there for a reason,” said a spokesperson from the Department of Buildings, which oversees and regulates the structures. “Sidewalk sheds need to be in place … for as long as potentially unsafe conditions exist.”

The DOB has no requirement for how quickly a shed must be removed once the work is completed.

The major turning point in the proliferation of sidewalk sheds happened in 1980, a year after Barnard student Grace Gold was killed by a chunk of masonry falling from the eighth floor of a building on West 115th Street.

The city enacted Local Law 10, requiring any building more than six stories high to have any street-facing facades inspected every five years. And every facade check required a sidewalk shed for safety.

A rash of masonry accidents in the winter of 1997 led to the demolition of Local Law 10 and the introduction of the much more stringent Local Law 11 in 1998. The latest iteration of the law is known as the Facade Inspection and Safety Program.

None of the 10 businesses visited for this article received any outside assistance to mitigate losses while scaffolding is up. The city’s Department of Small Business Services doesn’t have specific help available for businesses with scaffolding. Neither does the Manhattan Chamber of Commerce, nor the DOB.

Manhattan Borough President Gale Brewer said her office receives many complaints about scaffolding—most often from retail tenants who have little advance notice or control over the pace of the work, yet have to suffer the consequences of reduced accessibility, visibility, and pedestrian traffic to their businesses from residents and businesses.

“Scaffolding that stays up for too long is an eyesore that darkens the streetscape and hurts businesses,” she said in an email.

“To really tackle this problem, we need to be proactive, which is why I’ve directed my staff to create legislative options that will ensure that safety dictates the existence of scaffolding instead of convenience to the building owner.”

In her September newsletter, Brewer suggests the DoB should:

Meanwhile, business owners like Tzortzatos are forced to choose between enduring or cutting their losses.