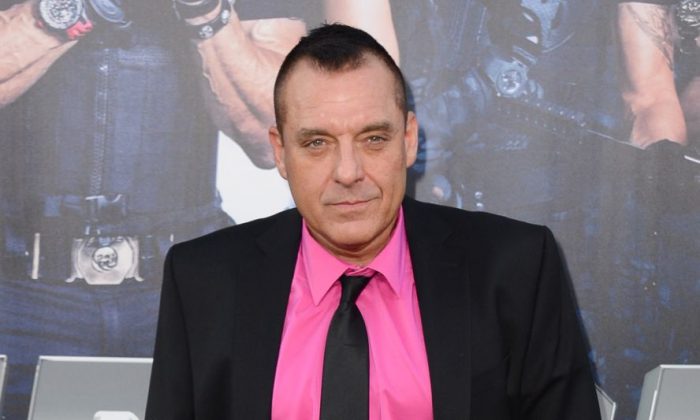 In this Aug. 11, 2014 file photo, actor Tom Sizemore arrives at the premiere of "The Expendables 3" in Los Angeles. Los Angeles police arrested Sizemore on suspicion of domestic violence Tuesday, July 19, 2016 after receiving a call around 8:15 a.m. about a fight involving the actor in downtown Los Angeles. (Photo by Jordan Strauss/Invision/AP, File)
Entertainment

LOS ANGELES—Tom Sizemore was arrested Tuesday on suspicion of felony domestic violence, a setback for the actor attempting a comeback following a career derailed by addiction, abuse allegations and more than a year in prison.

The “Black Hawk Down” actor famed for his portrayals of gruff tough guys was arrested Tuesday morning at a downtown Los Angeles apartment, said Los Angeles police Officer Jane Kim. She declined to disclose details about the alleged victim or the severity of any injuries.

The actor has battled serious substance abuse problems over the years but recently found work as a recurring character on the upcoming television series “Shooter,” an adaptation of a book and film about a marksman drawn into a modern day conspiracy to assassinate the U.S. president.

Sizemore became a star in the late 1990s and early 2000s with acclaimed appearances in “Saving Private Ryan” and “Heat.”

He then developed serious substance dependency problems that devastated his movie career, left him homeless, sent him to jail and led to a failed suicide attempt.

His comeback started in recent years after he wrote the candid book “By Some Miracle I Made It Out of There: A Memoir” about his recovery from addiction.

Sizemore told The Associated Press in 2013 after the book’s release that he believed his dependency was related to the trappings of success, something he thought he could mask with alcohol.

Finally, he said, crystal meth became the drug that consumed his life and powered his spectacular fall from success.

In 2003, he was convicted of assault and battery on his ex-girlfriend Heidi Fleiss, who testified the actor punched her in the jaw at the Four Seasons Hotel in Beverly Hills.

Fleiss, a former Hollywood madam convicted in 1994 of running a high-priced call-girl ring, also accusedSizemore of beating her so badly in New York that they could not attend the premiere of “Black Hawk Down.”

After his conviction, Sizemore denied he abused Fleiss and accused her of faking a picture showing her bruises.

He also pleaded no contest in 2003 and avoided a trial in a case in which another former girlfriend accused him of punching her and dragging her on the ground.

Over the next several years he was arrested on more drug and probation violations. He fell into debt and owed millions of dollars.

After failing numerous drug tests while on probation, Sizemore was imprisoned from August 2007 to January 2009.

His recovery was also documented by appearances on the reality TV show “Celebrity Rehab” and its spinoff “Sober House.”