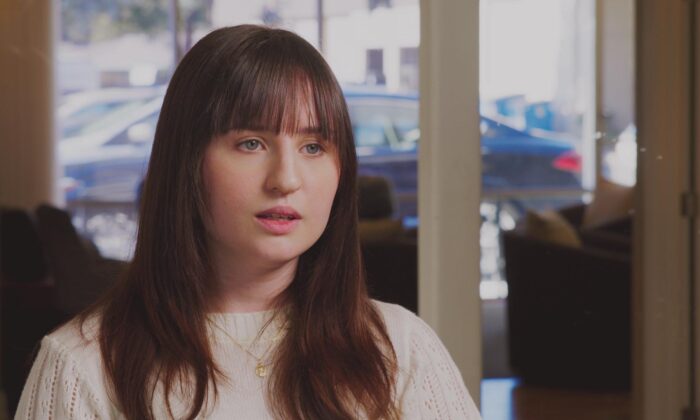 Helena, a woman interviewed in the film "The Detransition Diaries." (Courtesy of CBC Network)
Northern California

‘The Detransition Diaries’: Film Explores the Lives of Ex-transgender Women

Jennifer Lahl, a former nurse and an independent film producer based in California, believes the “powerful testimonies” of these “detransitioners” about their gender confusion, doubt, and regret will resonate deeply with those who watch the documentary, “The Detransition Diaries: Saving Our Sisters.”

“I thought this is a great way to communicate to people what’s happening to children at the hands of medical professionals,” Lahl told the Epoch Times.

Although the transgender movement has also affected boys and men, Lahl said she deliberately narrowed her focus to women because of the “rapid increase of young girls thinking that they were born in the wrong body.”

One of the women, Grace Lidinsky, describes in the film how she felt after undergoing a double mastectomy: a sense of doubt and the eventual realization she would never become a man no matter how much surgery she had. Although she has learned to accept her body, Lidinsky recalls that right after the surgery she had a deep feeling of regret.

“I had been hit with these awful feelings of having made a huge mistake. Undeniable, just like, ‘Oh no, what have I done?’” she says. “I also don’t really feel like a man. I just feel like a woman who has had her breasts cut off.”

Helena Kerschner, another detransitioner, says that taking testosterone negatively impacted her health to such a degree that she never went through with any gender transition surgeries.

“I wasn’t really able to have the mental wherewithal to go through the process of calling surgeons, dealing with insurance,” she says. “I like, watched myself transform from like the young teenager to just like this really unhappy looking person and, honestly, like unwell looking person … it just finally hit me that, like, ‘Oh my God, this has all been a mistake … everything.”

Cat Cattinson, a singer who lost her voice to testosterone injections, has since learned to accept herself as a woman. She is now regaining her singing voice and wrote a song for the documentary.

“When I just realized how detrimental the changes to my voice had been and how devastated I was that I had made irreversible changes to myself, I just decided to hold off. So, I canceled the top surgery and I also canceled my legal name change,” she says in the film.

All three women had been depressed and obsessed over their body images after spending countless hours online and believed gender transition was the answer.

“They thought this would solve all their problems only to find out it didn’t,” said Lahl.

The Detransition Diaries is the latest of about 10 documentaries Lahl and her team at the Center for Bioethics and Culture Network (CBC), an educational nonprofit, has produced. The trailer is available on the CBC Network’s Vimeo channel, where the full documentary will be released on Sept. 19, the same day as a live premiere screening in the San Francisco Bay Area.

Lahl quit the nursing profession more than two decades ago with 25 years of experience as a pediatric critical care nurse, a hospital administrator, and a senior-level nursing manager. After working at a children’s hospital in Oakland for about 10 years, she noticed a shift away from basic principles of medicine and the “first, do no harm” concepts associated with the Hippocratic Oath.

“I’ve seen a lot,” she said, “and what grieves me the most—what really drives me—is the injustice is at the hands of a profession that I loved dearly for so many years. We went to work every day as doctors and nurses to literally save lives, not to damage and ruin lives. And I see this ‘transing’ of children as damaging and ruining of lives in the name of good.”

When she left nursing, Lahl decided to go back to graduate school, and once there, she “got the bug” to focus on medical ethics. She then founded the CBC Network, an organization “firmly entrenched in the space of bioethics, biotechnology and medical ethics” that is committed to addressing “the medical abuse of children in the name of medicine,” she said.

Lahl has since traveled the world “several times and back” to speak on bio-ethical issues, at the United Nations three times, the European Parliament in Brussels, and to members of the Spanish parliament in Madrid.

In the case of children with gender dysphoria, who feel their gender doesn’t match their physical body, medicine used to take more of a wait-and-see approach, rather than rushing into medical and surgical interventions, Lahl said.

Except in rare cases where something is amiss with a child’s anatomy, such as being born with both male and female genitals, medical interventions aren’t necessary, she said.

“There is nothing wrong with these children. We should just leave them alone,” she said. “It’s all in their minds that they think they were born in the wrong body. We don’t need to do surgery. We don’t need to put these people on drugs. We need to figure out what is the root cause of their gender confusion and help them be comfortable.”

Lahl compared gender dysphoric girls to those who are anorexic.

“We have to teach them that they’re not fat, they’re beautiful, and how they can love and make peace with their bodies versus starving their bodies to death because in their minds, they’re fat,” she said.

The documentary delves into the concept of Rapid-Onset Gender Dysphoria (ROGD), a phrase used to describe a phenomenon among adolescents derived from a study by physician Dr. Lisa Littman that researched potential factors contributing to gender dysphoria, such as “social influences and maladaptive coping mechanisms.”

Lahl said the Detransition Diaries shows that girls with ROGD who are prescribed puberty blockers, testosterone, and eventually get surgery soon realize there is no magic cure for their mental conditions.

“It’s not like they can just pop into CVS and get a pill that will wipe everything away,” Lahl said. “Every intervention comes at a cost. It’s more complications, more risks, more surgeries, and more anesthesia.”

Instead of rushing into medical and surgical interventions, children with ROGD need counseling, psychiatry, and a thorough assessment of what’s going on in their lives at home and at school, Lahl said.

Lahl said the shift that she’s seen in medicine even goes beyond gender-transition surgery. For example, plastic surgeons seem to be willing to do anything people want, she said.

“You’re born in the wrong body? We’re here to help you. You don’t like the size of your butt or the shape of your breasts? Here’s how we can help you. If you’re an able-bodied person, but you think you really should have your healthy limbs cut off because in your mind, you’re disabled, we have surgeons that will amputate healthy limbs,” she said.

The Politics of Medicine

Lahl said another reason for making the film is to challenge the narratives on transgender ideology, because transgender activists “don’t want to hear about anybody who regrets their decision.”

“I’ve seen people on social media who do want tolerance and want to be able to figure out a way to live peacefully together, but even those people get marginalized and backlash,” she said.

Lahl has also met parents of all political persuasions whose children have suffered from ROGD, and has seen their resolve and numbers grow.

“They are just ready to revolt, and say, ‘Not on our watch will you do this to our children,’” Lahl said. “If anything, parents know and love their children better than the government, or the state, or the public school system.”

Citing the case of Ted Hudacko, a California man who recently lost custody of his son for refusing to “affirm” him as a girl, Lahl said parents are “living in fear” that if they don’t concede and go along with what the medical and education experts are telling them, they could have their children taken away.

The politicization of science and medicine is “absolute corruption,” she said.

During the COVID-19 lockdowns, it became apparent that a growing number of Americans have lost faith in medicine and no longer “trust the science,” as the government has ordered them to do, she said.

Meanwhile, Lahl “unabashedly” believes there are only two genders.

“I don’t believe that there are trans children,” she said. “There’s male and there’s female, and that’s all there is. Until about 20 or 30 years ago, everybody on the planet kind of agreed with that. I absolutely believe that you cannot change sex. You can take as many drugs as you want and have as many surgeries as you want, but you will never change a male body into a female body or vice-versa.”

Lahl has voiced her opposition to California Senate Bill 107, proposed legislation authored by Sen. Scott Wiener (D-San Francisco), that would shelter parents who consent to the use of puberty blockers, cross-sex hormones, and gender transition surgery on their children from prosecution in other states that view such actions as child abuse.

The “gender-affirming health care” bill is currently on California Gov. Newsom’s desk to either veto or sign into law. Newsom has until Sept. 30 to decide.