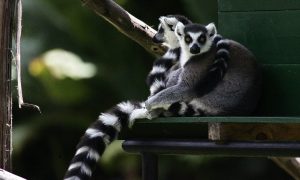 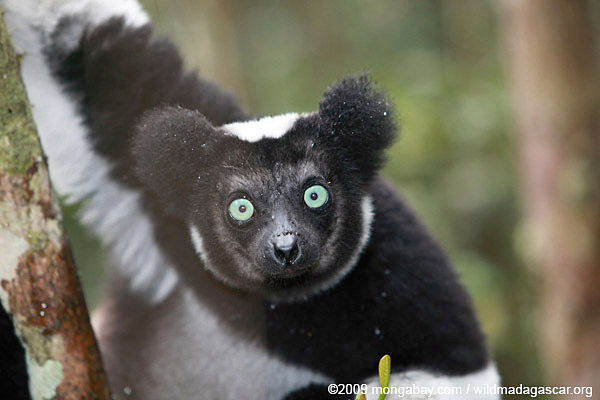 Saving Endangered Lemurs on A Budget of $7 Million

Last year, scientists released an emergency three-year plan that they argued could, quite literally, save the world’s lemurs from mass extinction. Costing just $7.6 million, the plan focused on setting up better protections and conservation programs in 30 lemur hotspots. However, there was one sticking point: donating to small programs in one of the world’s poorest countries was not exactly user friendly. Enter: Lynne Venart, the head of the design firm the Art Monkey. Venart’s company, partnering with a slew of top conservation groups, is today launching the Lemur Conservation Network.

“When I read the lemur action plan, I was so excited that scientists were coming together to save them with a comprehensive plan that worked with the Malagasy people,” Venart told mongabay.com. “I was convinced, but donating to individual projects required more investigation than people expect nowadays. The plan needed an online funding guide to make it easy for people to take that step to donate.”

This is where the Lemur Conservation Network comes in. The website allows donors, even lemur-loving individuals who only have a little to give, to finally support lemur conservation effectively and easily. The network brings together over 40 conservation groups and research institutes, which reads like a who’s who of lemur efforts, but it’s target is individual who have a passion for this primate family.

“The site empowers the individual supporter of conservation,” said Venart. “Without a doubt, the work in the lemur action plan needs scientists and dedicated people working on the ground in Madagascar. But how does someone else who cares about Madagascar and lemur conservation help? The site helps people learn more about what is really happening in lemur conservation and who is working to save lemurs.”

Users can select conservation groups by their type of work —i.e. community conservation, research, habitat protection etc. —and, in the future, donors will even be able to look up conservation programs based on specific lemur species. So, if you love the wonderfully-bizarre aye-aye you can put your donation to work for that Vulnerable species.

“By bringing in all types and sizes of organizations, it lets people decide what organization most interests them,” confirmed Venart. “Many of the organizations in the Lemur Conservation Network do not have the budgets or the technological know how to actively promote their work online, but that doesn’t mean their conservation work is any less worthy of support.”

So, why lemurs? Well, for a number of reasons.

All of the world’s lemurs are found on a single island and a single country: Madagascar. Isolated from other primate competitors for around 60 million years has allowed lemurs not only to survive here —when they went extinct elsewhere —but to evolve into an astounding variety of types and species, adapted to all sorts of habitats and foods sources.

Today, researchers have identified 103 distinct lemur species on the island, a number that has boomed in recent decades due to DNA testing. And more lemur species are likely to be uncovered.

“A lot of people think [lemurs] are cute, furry little adorable creatures, and that’s a perfectly good reason to support their conservation! What is most intriguing to me personally is how they have adapted over time in Madagascar, evolving into over 100 highly specialized species,” said Venart. “We can learn so much about evolution and species adaptation from lemurs.”

Yet lemurs are one of the world’s most endangered families. The IUCN Red List considers a staggering 91 percent of lemurs threatened with extinction. Of these, 48 are considered Endangered —nearly half —and 22 species are considered Critically Endangered —more than a fifth.

The biggest threat to lemurs is deforestation and habitat degradation. Only around 20 percent of Madagascar’s historic forests remain, and these are threatened by slash-and-burn farming, known locally as tavy . The country also remains in the throes of an illegal logging crisis, with loggers cutting rosewoods trees from inside Madagascar’s protected areas and smuggling them to China where rosewood fetches exorbitant prices. While lemurs are the most high profile group on the island, this ongoing forest destruction is imperiling thousands of other species, many of them —like lemurs —found no-where else on the planet.

According to the Global Forest Watch, Madagascar lost approximately 1.3 million hectares of tree cover from 2001 through 2012. With an estimated 17 million hectares of forest cover in total —at 30 percent canopy coverage —this represents a total loss of more than seven percent of the county’s forest. It should be noted, however, that this may not represent outright deforestation as tree plantation harvesting may be included in the data.

On the plus side, deforestation in 2012 was at its lowest point during the whole period, with a total loss of approximately 71,000 hectares. Also, during the same 12-year period, the country also saw regrowth of 407,000 hectares, offsetting some of the total losses.

While forest destruction remains the biggest threat to lemurs, a rising issue is hunting, both for bushmeat and even the illegal pet trade. Conservationists say around 28,000 lemurs are taken from the wild annually for either food or the pet trade, putting a number of species under major pressure.

Underlying all of this is human population and poverty. Twenty-one million people call Madagascar home (around the same population density as the U.S.). But, unlike the U.S., the population is booming, growing at nearly 3 percent annually with more than 40 percent of the population under 15.

Madagascar is also one of the poorest countries in the world. More than 90 percent of people live on less than $2 a day while half the country’s children under five are said to suffer from malnutrition. Unstable governance, including a coup in 2009, only made thing worse.

Yet, conservationists say protecting lemurs could actually help the human population as well.

Lemurs are hugely important to the people of Madagascar not just as the best-known symbol of the country, but for the money they bring in.

“Lemurs are the goose laying the golden eggs for Madagascar; tourists are not going to come and see empty forests without lemurs,” said local Malagasy primatologist, Jonah Ratsimbazafy, who is the co-vice Chair of the IUCN SSC Primate Specialist Group.

Even in the midst of the 2009 coup, when foreign donors pulled out their money from Madagascar, tourists continued to show up to see lemurs albeit in somewhat smaller numbers.

“Thousands of families depend on [lemurs] for their livelihoods,” noted Ratismbazafy.

Currently, the country sees around 200,000-300,000 tourists a year, but the new government hopes to push those numbers up significantly.

In addition to drawing in visitors, lemurs also play key ecological roles. They are vital seed dispersers and pollinators for Madagascar’s imperiled forests. If the lemurs vanish, so could many plant species and the forest altogether. Forests are vital in the country for erosion protection and water sources.

“Lemurs play crucial roles in the growth and spread of forests, and without them we might lose these natural areas that provide clean water, food and shelter to so many people in rural Madagascar,” said Steig Johnson, an advisor to the Lemur Conservation Network. “Saving lemurs means saving people’s livelihoods.”

“Lemurs are without a doubt the country’s most distinctive brand in the global arena, and a major asset in scientific, cultural, and economic terms. Their conservation should be a very high priority focus for government and civil society at all levels,” said Russ Mittermeier, Chairman of the IUCN SSC Primate Specialist Group and the Executive Vice-Chair of Conservation International.

The three-year emergency plan —coming in at $7.6 million —is also quite a deal when one considers it could safeguard a wholly unique family of primates. As a comparison, last year, in 2010, donors and governments pledged $300 million to save the tiger from extinction or nearly 40 times what lemur conservationists are asking for.

Of course, when it comes to dollars and cents, conservation worldwide is often on the losing end of the spectrum, far outstripped by other issues. This may be one of the reasons why lemurs —despite being known and beloved around the world —remain as threatened as they are.

One of the authors of the lemur emergency plan, Christoph Schwitze with Bristol Zoological Society, said that it’s make or break time for lemurs.

“The fact is that if we don’t act now, we risk losing a lemur species for the first time in two centuries,” said and one of the authors of the lemur action plan. “The importance of the projects we’ve outlined in the IUCN lemur action plan simply cannot be overstated.””

Venart added that now is the time to act given that the political situation in Madagascar is finally improving. In December, 2013, the Malagasy people elected Hery Rajaonarimampianin in the first democratic elections since the coup. For his part, Rajaonarimampianina has called for deepening and expanding conservation efforts and pushing ecotourism as a way to raise people out of poverty.

“With international aid now returning to Madagascar and increased international business investment interest in the country, there is no better time than now to ensure that these investments benefit the country and the Malagasy people in positive ways by protecting Madagascar’s natural resources and ensuring the survival of lemurs,” said Venart.

Indeed, both the fate of the Malagasy people and the lemurs may depend on conservation actions taken today.

Close up of deforestation from 2001-2012 in northern Madagascar. Forest loss shown in pink while Intact Forest Landscapes (IFL) shown in dark green and forest degradation in brown. Image courtesy of Global Forest Watch. Click to enlarge.