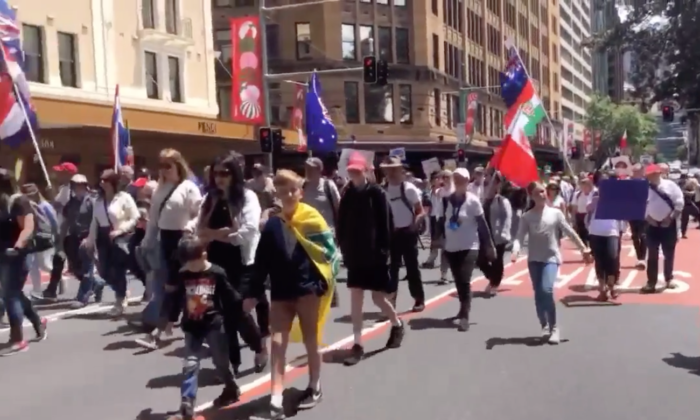 Thousands of protesters marched through the city against COVID-19 mandates in Sydney, Australia, on Dec. 12, 2021. (Screenshot/Epoch Times staff)
Australia

‘Save the Children’: Australians Rally Across the Country Against COVID-19 Vaccine Mandates

Australians protested in large numbers across the country on Sunday against COVID-19 vaccine mandates in multiple states, with the turnout for the “Reclaim the Line” protests distinctly prominent in the cities of Sydney and Melbourne.

In Sydney, New South Wales (NSW), thousands of people peacefully gathered at Hyde Park before setting off on a march through the city. As police officers stood and watched, the crowd, children among them, chanted “save the children,” presumably referring to the country’s COVID-19 vaccination program to be extended to all children aged 5–11 starting in January 2022. According to current policies, the children won’t be mandated to have the shots.

One video post on the encrypted messaging app Telegram described the scene as involving “oceans of people.” Another video on Telegram showed hundreds upon hundreds of people marching down Elizabeth Street, while a digital sign reads, “Protest March Sydney CBD, expect delays.”

Demonstrators ultimately arrived at Prince Alfred Park in Surry Hills where they joined a rally with music and speeches. At one point, the crowd clapped together loudly, with some yelling “freedom.”

In Melbourne, Victoria, protesters gathered at Parliament House on Spring Street before they marched down Bourke Street, chanting “free Victoria,” reported 9 News. Banners read “reclaim the line” and “together we can stop vaccine passports.”

Videos taken on the day showed a jubilant Melbourne crowd playing drums, and later singing songs to music. The protesters arrived and congregated at Royal Exhibition Building at the Carlton Gardens, where they also sang and played music.

Protests also took place in multiple other locations across Australia, with video footage and photos emerging on social media from NSW’s Newcastle, Coffs Harbour, Tweed Heads, and the border between NSW and Queensland. Protests were also being organized for other parts of Queensland, as well as the cities of Canberra, Adelaide, and Hobart.

According to multiple reports, protesters asserted they were not opposed to the COVID-19 vaccines, but were against the idea of government-backed mandatory COVID-19 vaccination policies affecting hundreds of thousands of workers across many industries.

Action group National Education United in the past week has been urging people to join the demonstrations. Mack, a high school teacher from Sydney who began the NEU group and started the peaceful “Reclaim the Line” protests, issued a video on Dec. 9 urging a strong show of numbers in every Australian city and state.

“Eighteen months ago it was ‘two weeks to flatten the curve’ and now it’s become ‘two jabs to keep your job.’ That just happened in 18 months,” he said in the video. “What do you think is going to happen in the next 18 months if we don’t wake up fast? If we don’t hold them to account?”

He added: “A message is being sent to these spineless cowards that the people are not going away and the people will not go quietly. We will no longer be silent because something doesn’t seem right.” He noted that he is not against the government but that “we need good government, we need a government and a system that works.”

He urged people to write to their local and state leaders to “make demands” and “demand answers.” He added: “You think they don’t take notice but believe me, they do. They see the real numbers. They don’t watch the six o’clock news. They know that the people of Australia are speaking up and we’ve had enough.”

“We hold the moral high ground here. We’re on the right side of history,” he said, later adding: “There is an awakening happening and you’re all a part of it. But you can’t give up now. We have to be ruthless and relentless. This is a spiritual revolution that every single one of you is a part of.”

The protests come a few days before Victoria is set to face new pandemic-specific laws introduced by the state government on Dec. 16, a day after its current state of emergency expires. The legislation was the focus of intense public debate and multiple protest rallies in Melbourne over the past several weeks.

ATAGI on the same day also granted Moderna vaccine approval as a booster shot for people over the age of 18. It now joins the Pfizer shot as “recommended for use as a booster vaccine, and are considered equally acceptable” by the Australian government.