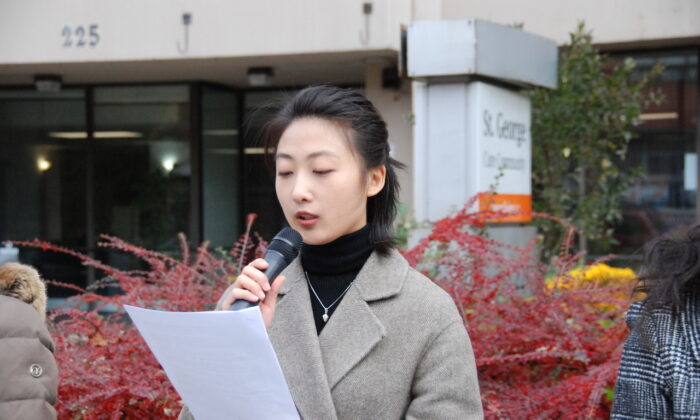 Liu Mingyuan, a student at Ontario’s Sheridan College, speaks out against the Chinese regime’s persecution of Falun Gong at a protest outside the Chinese Consulate in Toronto on Nov. 18, 2021. The Chinese regime has recently detained her mother, Liu Yan, for her belief in the Falun Gong spiritual practice. (Michelle Hu/The Epoch Times)
Canada

A Toronto college student is speaking out against the Chinese regime’s detention of her mother for her belief in Falun Gong.

“Today, I am sharing the story about me and my family. But this is also the story of countless Falun Gong practitioners over the past 20 years,” Liu Mingyuan said on Nov. 18 at a protest outside the Chinese Consulate to draw attention to her mother’s plight under the communist regime’s persecution of her faith.

“On this land of freedom, I am able to use my voice, to call on the world to help rescue my mother.”

Liu Mingyuan’s mother, Liu Yan, was arrested by Chinese authorities on Sept. 30 in Kunming, the capital of Yunnan Province in southwest China, and has been detained there ever since.

Twenty-four-year-old Liu Mingyuan, who also goes by the name of Lucy, moved to Canada in August to study computer animation at Sheridan College.

From an early age, she has witnessed her family being torn apart multiple times by the Chinese Communist Party (CCP) for their practice of Falun Gong.

“I only hope that we could raise more awareness and bring help from the international society to end this brutal persecution.”

Falun Gong is a traditional Chinese spiritual practice that consists of meditation exercises and moral teachings based on the principles of “truthfulness, compassion, and forbearance.” Also called Falun Dafa, the practice emerged in China in 1992, where it quickly spread due to its reported benefits to mental and physical health. By 1999, it had attracted 70 million to 100 million adherents across the country, according to Chinese government estimates.

However, former CCP leader Jiang Zemin perceived that popularity as a threat to the regime’s authoritarian rule. On July 20, 1999, Jiang launched a Cultural Revolution-style hate campaign and violent suppression aimed at eradicating the practice.

He also established the “610 Office,” a Gestapo-like extrajudicial body to spearhead the persecution of Falun Gong adherents nationwide, with the ability to operate outside the existing legal system and its potential restrictions. “No legislation was passed establishing it. No provisions formally outlined its mandate,” according to the New York-based Falun Dafa Information Center.

Liu Yan began practising Falun Gong in 1994. Before her most recent arrest, she had already experienced detention and imprisonment for her belief. In 1999, the Chinese regime detained her along with her daughter, who was then just 2 years old, for refusing to give up her belief in Falun Gong.

Liu Yan was eventually released, and she later found a teaching position at Jilin University–Lambton College in China’s northeastern city of Changchun. The job, which made use of her area of expertise in the English language, brought her into close contact with Canadian academics, as the institution has a partnership with North American universities including the Memorial University of Newfoundland.

But in 2001, Liu Yan’s career at the college was ended when Jiang intensified his draconian campaign of persecution against Falun Gong adherents. The police once again targeted her, and she was forced into hiding.

At the time, “in an attempt to lure out my mother, the police tried to take me hostage at my preschool,” Liu Mingyuan said.

Liu Mingyuan said her mother could face another three to four years in prison following her latest arrest.

Joel Chipkar, a spokesperson for the Falun Dafa Association of Canada, said Liu Yan is among 12 other prisoners of conscience with Canadian ties who remain in custody in China due to their practice of the Falun Gong spiritual faith.

One of them is a Canadian citizen, Sun Qian, who was arrested in Beijing in February 2017. Chinese police forcibly entered her home, dragged her out, and took her to a detention centre. She was then subjected to torture with the aim of forcing her to renounce her faith. According to her lawyer, Li Jinsong, an arrest warrant that was issued was dated after her arrest.

In June 2020, more than three years after being arrested, Sun was sentenced to eight years in prison. She also renounced her Canadian citizenship while in detention, a move that her supporters believe was made under duress.

Chipkar noted that the CCP has a history of “using interference, propaganda, and fake news” in efforts to influence Canadian government officials, such as by demonizing the regime’s victims in order to quell support for human rights in China.

“The communist party is not just targeting Falun Gong, it is targeting Canadian values and the morality and conscience of all Canadian government officials and Canadian citizens,” Chipkar said.