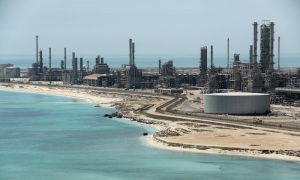 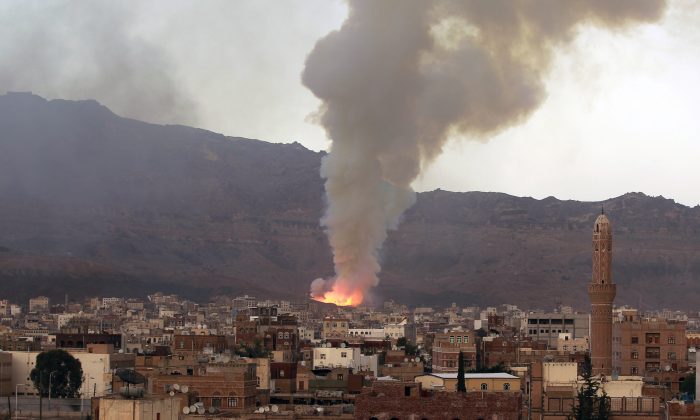 Smoke billows following an airstrike by the Saudi-led coalition on May 11, in the capital Sanaa. the Saudi war in Yemen stands little chance of success without significant ground forces. (Mohammed Huwais/AFP/Getty Images)
Middle East

SANAA, Yemen— A series of pre-dawn Saudi-led airstrikes on Sunday targeted the headquarters of Yemen’s armed forces in the rebel-held capital, killing at least 22 people, security and hospital officials said.

They said the dead were mostly soldiers and that the airstrikes damaged several nearby homes and shook the entire city. Residents said the armed forces’ headquarters, a short distance away from the city center, was hit by at least three airstrikes.

The officials spoke on condition of anonymity because they were not authorized to speak to the media.

The U.S.-backed coalition began launching airstrikes on March 26 against the Iranian-backed Shiite rebels, known as Houthis, and their allies in the military and security forces. The Houthis seized Sanaa in September and later captured much of northern Yemen before advancing on the south in March.

Their advance on the south forced internationally recognized President Abed Rabbo Mansour Hadi to flee the southern port city of Aden to neighboring Saudi Arabia. He had earlier fled Sanaa to Aden.

Sunday’s airstrikes came one day after the Houthis fired a Scud missile into Saudi Arabia, a dramatic escalation of the conflict. The attack indicated that despite more than two months of coalition airstrikes the rebels still pose a threat to cities across the border inside Saudi Arabia.

The official Saudi Press Agency said two missiles launched from a Patriot missile battery shot down the Scud before dawn near the southwestern city of Khamis Mushait. The agency did not report any casualties in the attack, the first use of a Cold War-era Scud by the rebels since the airstrikes began.

Yemen’s state news agency SABA, now controlled by the Houthis, acknowledged that the rebels fired the Scud. Khamis Mushait is home to the King Khalid Air Base, the largest such facility in that part of the country.

The Yemeni military was widely believed to possess around 300 Scud missiles, most of which fell into the hands of the rebels. In April, the spokesman for the Saudi-led coalition, Saudi Brig. Gen. Ahmed Asiri, implied that the airstrikes had seriously degraded the Scud arsenal.