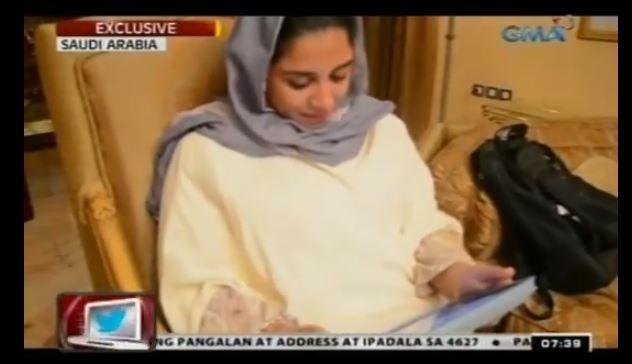 A Saudi reporter got teary-eyed after seeing her former nanny Marie Ning on television.

Ning was Radwan’s nanny for five years, beginning in 1987.

Ning is now based in Candelaria town in Quezon province; she was featured on GMA’s State of the Nation with Jessica Soho this week.

“She is one of the most memorable persons in our life, she was very good to us,” Radwan told GMA.

“We were kids at that times though but she planted a seed of kindness in our heart.”

Ning had composed a letter to Radwan’s mother, which was passed to Radwan when she arrived in Jeddah from Hungary. The letter prompted Radwan to try to locate Ning on the Internet.

Radwan’s efforts led to a Manila Bulletin story abut the search that led to her locating Ning.

“Dada we missed you, we love you and I hope you are good and happy. I hope you finally found the love of your life and the life that you always wanted, I wish you more blessings and I hope to see you soon,” Radwan said.

Ning said that she enjoyed working for the Radwan family and didn’t want to leave them, but decided to return home.

The pair plan on reuniting in person at some point, though plans are still forming.