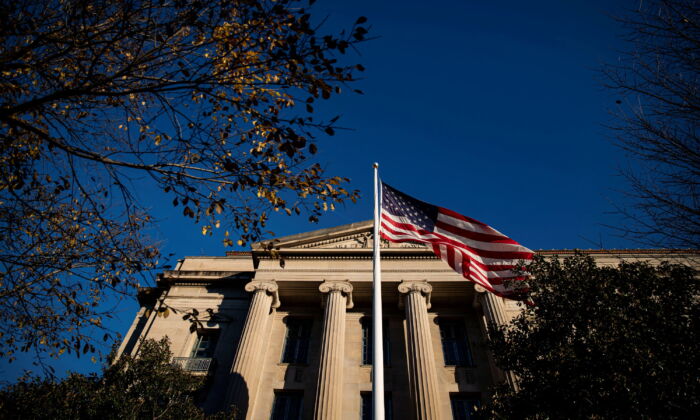 An American flag waves outside the Department of Justice Building in Washington on Dec. 15, 2020. (Al Drago/Reuters)
Canada

Saudi-Born Canadian Gets Life Sentence in US for ISIS Propaganda Support, Terrorism

The U.S. Department of Justice says a Saudi-born Canadian citizen was sentenced to life in prison Friday for conspiring to provide support resulting in death to the terrorist organization ISIS.

The Department of Justice statement says Mohammed Khalifa, 39, pleaded guilty last December in District Court for the Eastern District of Virginia to a charge of conspiring to provide material or resources to a foreign terrorist organization, resulting in death.

The statement says Khalifa was a lead Islamic State propaganda official who served as the English-speaking narrator on more than a dozen violent ISIS videos.

It also says Khalifa, who was captured in Syria in 2019, served as an ISIS fighter and executed two Syrian soldiers on behalf of the terrorist organization.

The Department of Justice Statement says Khalifa narrated two of the most violent ISIS videos: “Flames of War: Fighting Has Just Begun” and “Flames of War II: Until The Final Hour,” both depicting executions of prisoners and terrorist attacks on the U.S.

Global Affairs Canada was not immediately available to comment on the sentencing.

“During the time Khalifa was a prominent member of ISIS, the terrorist organization was conducting a brutal hostage taking and ransom demand campaign involving journalists and humanitarian aid workers who came to Syria from across the globe,” says the statement.