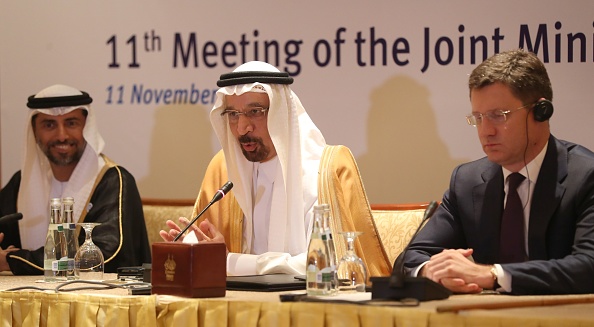 Saudi Arabia signaled it will reduce oil exports by as much as half a million barrels a day in December, the first tangible sign that OPEC is starting to trim output as it faces an oversupplied market in 2019.

The Saudis boosted production in November but will trim shipments for next month, Energy Minister Khalid Al-Falih told reporters in Abu Dhabi. The Organization of Petroleum Exporting Countries and other suppliers are seeing signs of an emerging surplus in the U.S., though it’s too early to talk about cutting output, he said before a meeting to assess compliance with their pledged cuts in production.

If OPEC and its partners go ahead and extend cuts in 2019, Saudi Arabia will need to convince not only fellow group members such as Iraq that are trying to boost production but crucially Russia, its ally since 2016, which so far hasn’t showed much enthusiasm to trim output.

“I think it all comes down to Russia,” said Helima Croft, chief commodities strategist at RBC Capital Market LLC. “They seem to be sitting squarely on the fence about pulling the barrels back.”

OPEC and allied suppliers are under mounting pressure to consider renewed cuts after a slump in oil prices. Crude on both sides of the Atlantic tumbled Nov. 9 as the U.S. reported rising stocks and Washington granted waivers that lessen the impact of sanctions on Iranian exports. Brent plunged below $70 a barrel for the first time in six months, shedding 4 percent last week. West Texas Intermediate futures also tumbled, by about 5 percent.

“December nominations are 500,000 barrels a day less than November,” Al-Falih said, referring to the amount of crude that its refining clients request in a given month—in the industry’s jargon, “nominations”—to decide its production for the period. With Riyadh cutting, and some other OPEC countries talking about an oversupplied market, the group is setting the scene for reversing six months of output increases when it meets in Vienna in early December.

The Saudis appear to be striking a fine balance, on the one hand saying there’s no need to panic and insisting the market isn’t as oversupplied as some bearish investors claim, and on the other starting to reduce production unilaterally. The kingdom may be wary of inciting the ire of U.S. President Donald Trump, who has blamed OPEC for not doing enough to rein in oil prices. By signaling that nominations are lower, Riyadh is in effect saying it’s not cutting output, but rather that there’s less demand for Saudi oil.

“Ideally, we don’t like to cut,” Al-Falih said. “We will only cut if we see a persistent supply glut emerging, quite frankly. We’re seeing some signs of this coming out of the U.S. We have not seen the signs globally, nor can we predict that they will persist until 2019.”

Russian Energy Minister Alexander Novak said it’s “hard to say” if oil markets will be over-supplied next year. “We need to wait some time, to see how the market develops,” he told reporters in Abu Dhabi, the United Arab Emirates capital. Russia is currently pumping about 10,000 to 20,000 barrels a day below October levels, Novak said.

The International Energy Agency has repeatedly called for OPEC to open the taps to ensure global demand for crude is met. IEA Executive Director Fatih Birol has spoken of the market entering “ a red zone” if output losses from Venezuela and exports from Iran are not offset.

“We think we have available capacity to produce as a group what is required from us,” U.A.E. Energy Minister Suhail Al Mazrouei said Sunday.

The producer group and its allies have been ramping up output rapidly since May, responding to pressure from Trump and making up for supply losses from Iran and Venezuela. Now, they’re considering a U-turn.