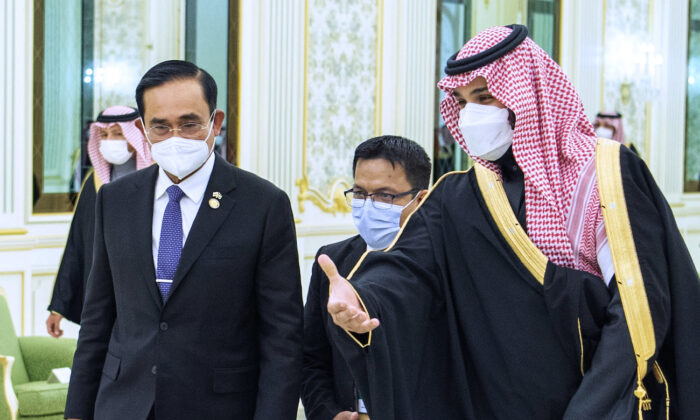 Saudi Arabia and Thailand have agreed to fully restore their diplomatic relations and to exchange ambassadors in a “historic breakthrough” after three decades of hostility stemming from a diamond theft, the countries said in a joint statement on Tuesday.

Both sides agreed on “the appointment of ambassadors to their respective capitals in the near future and the setting up of consultative mechanisms for consolidating their bilateral cooperation,” it stated.

“The two sides exchanged views on various regional and international issues, and discussed means and ways to strengthen their bilateral relations in all areas,” the statement reads.

Intensive coordination between the two nations will also commence in the coming months to discuss bilateral cooperation.

It also noted that both sides agreed to strengthen their economic and trade relations by exploring investment and other opportunities, such as renewable energy, digital transformation, and cybersecurity.

The two leaders also agreed to increase interactions and coordination between government agencies and private sectors to elevate their bilateral relations “to new heights for the mutual benefit” of the two countries.

Following the announcement, Saudi Arabian Airlines said on Twitter that direct flights to Thailand would resume in May.

Saudi Arabia had previously downgraded relations with Thailand after a diplomatic row over the 1989 theft of roughly $20 million worth of jewels by a Thai janitor working in the palace of a Saudi prince, in what became known as the “Blue Diamond Affair.”

Prayut expressed “his sincere regrets for the tragic cases that took place in Thailand between 1989 to 1990” and pledged “to resolve all pending issues between the two sides,” the statement claimed.

He reaffirmed his government’s commitment to raising the cases to “competent Thai authorities if new well-founded evidence” relating to the cases emerges, and to provide “appropriate security” to Saudi officials.

Both sides also reiterated their commitments “to do their utmost to ensure the safety of each other’s nationals in their respective countries,” it stated.

Three Saudi diplomats in Thailand were assassinated in three different incidents a year after the diamond theft.

In 2014, a Thai court dropped a case against five men, including a senior police officer, charged with the murder of Saudi businessman Mohammad al-Ruwaili, who went missing one month after witnessing one of the Saudi diplomats’ shootings.