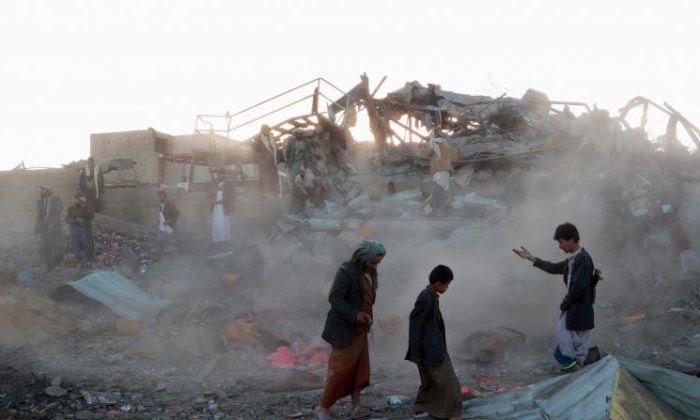 People walk at the site of an air strike in the northwestern city of Saada, Yemen on Nov. 1, 2017. (Naif Rahma/Reuters)
Middle East

“There were two to three strikes on the Ministry of Defense,” local journalist Hassain Abukhaiti told Russian state-backed RT. “One of the missiles hit a house” near the building, he said. “A family was living there,” the journalist added. “The house has been destroyed. It is very likely that the entire family was killed.”

It comes after reports that Iran had manufactured the ballistic missile fired by Yemeni rebels toward Riyadh, the Saudi capital, several days ago.

The Houthi media outlet Al-Masirah also reported on the two air strikes, according to Al Arabiya.

Jeffrey Harrigian, commander for southwest Asia at U.S. Air Forces Central Command, also told reporters while on a visit to Dubai that it was important to find diplomatic solutions to tensions surrounding Lebanon instead of going to war.

“What we have seen, clearly from the results of the ballistic missile attacks, that there have been Iranian markings on those missiles, that’s been demonstrated,” Harrigian said, according to Reuters.

“To me that connects the dots to Iran in terms of who’s providing those missiles and that capability.”

Meanwhile, Saudi Arabia has accused Lebanon and its Shiite Hezbollah movement of declaring war on it. Riyadh has advised Saudi citizens not to travel to Lebanon, or if already there to leave as soon as possible.

“With respect to Lebanon, I think the goal will be to try to find diplomatic solutions,” Harrigian said.

“I don’t want to speak to specifically how the kingdom of Saudi Arabia will deal with that, but I would like to think we will be able to find a solution to that problem that would allow diplomatic efforts to achieve success versus going to war.”